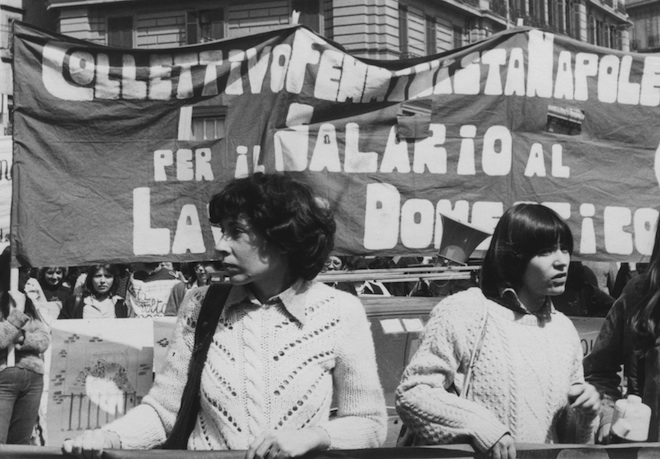 Marx writes, ‘Only labour which produces capital is productive labour’. So what do we say about women who work at home (so-called ‘housewives’) whose labour produces/reproduces the male worker who in turn produces capital? Do they produce capital? In a crucially important passage at p. 274 of volume 1 of Capital Marx offers two radically different definitions of the ‘value of labour-power’, the first in terms of the living labour objectified in the commodity labour-power, the second in terms of the value of the means of subsistence necessary for the maintenance of the worker. It was the latter definition that became standard, viz. the conception of the value of labour-power as a basket of wage goods.

With two generations of ‘social reproduction theory’ now on offer, it’s worth asking which contributes in a more fundamental way to broadening the Marxist understanding of capitalism. The focus of the first (developed in the seventies, chiefly in Italy) was on women’s labour in the home (‘housework’) and its hidden connections with the accumulation of the total social capital. The second is much less interested in this problem and more interested in a more general process of ‘societal reproduction’ of/under capitalism the terms of which would be largely unrecognisable in most countries outside the West, as Alessandra Mezzadri has pointed out. (Its lack of interest in the issue of domestic labour is ironic, since it claims a pedigree from Lise Vogel’s work, which, on its own claim, made domestic labour lie at the heart of women’s oppression under capitalism; cf. Marxism and the Oppression of Women, p. 177.) The first created a strand of radical feminism that merged Marxist positions with feminist ones and sought to develop both in new and subversive ways. Federici has recently described the merger as a ‘theoretical revolution that has changed both Marxism and Feminism’. The second lacks any notable contribution to Marxist theory as such.

In the late 70s, it was fashionable (among Anglo-American Marxists) to say that domestic labour lay ‘outside the capitalist mode of production’ (Paul Smith) or ‘outside the theory of the capitalist mode of production’ (Molyneux). But this was a period before, say, Rosdolsky had had a wider impact on the English-speaking world and notions like individual and total social capital would become more widely known; before the distinctions between the different volumes of Capital had fully impinged on the consciousness even of otherwise sophisticated theorists like Lise Vogel. She writes, for example, ‘Domestic labour is the portion of necessary labour that is performed outside the sphere of capitalist production’ (p. 159), where all ‘the sphere of capitalist production’ means is the immediate process of production of capital (i.e. Volume One), which therefore begs the question, what about the sphere of the reproduction of the total capital? Does it lie outside that as well? Applying Volume Two’s idea of a ‘circuit’ to the circulation of commodified labour-power necessarily involves integrating domestic labour with the circulation of capital as a ‘unified process of circulation and production’, and thus involves breaking down the division between reproduction and production that dominates so much of the thinking on these issues.

In sharp contrast was the Marxist-feminist tradition that emerged in Italy from the 1970s. To convey a flavour of this more subversive strand of politics, consider two short excerpts from its writings. In a seminal pamphlet from the very early seventies that reflected the wider culture of the Italian ‘workerists’, Maria Rosa Dalla Costa wrote: ‘The community is the other half of capitalist organization, the other area of hidden capitalist exploitation, the other, hidden, source of surplus labor. It becomes increasingly regimented like a factory, what we call a social factory, where the costs and nature of transport, housing, medical care, education, police are all points of struggle. And this social factory has as its pivot the woman in the home producing labor power as a commodity, and her struggle not to’ (Dalla Costa, Women and the Subversion of the Community, 1971).

A second excerpt, written a whole 46 years later, this time by Silvia Federici in a short paper called ‘Marx and Feminism’, describes what she calls the ‘wage illusion’. Here she writes, ‘In his understanding of the working day and the struggle over the working day, Marx ignores the fact that the wage mobilises not only waged workers but unwaged labour as well, that it extracts surplus labour also from the unwaged, which means that the working day is much longer and wider than the one computed on the shop floor’.

It was this crucial idea that Leopoldina Fortunati developed in a hugely neglected book L’Arcano della Riproduzione, the title of which is best translated as The Secret of Reproduction, although the available English translation reads ‘The Arcane of Reproduction’. This was published in 1981 when she was 32. (For the record, in India, broadly the same argument was developed four years earlier by Rohini Hensman in an essay called ‘Wage Labour: The Production and Sale of the Commodity Labour-Power’.1 She began by highlighting an inconsistency in the way Marx characterised the individual consumption of the worker as both productive and unproductive, and went on to argue that not only did domestic labour contribute to the value of labour-power in a decisive way and was in this sense an essential ‘aspect of the production and reproduction of capital’ (Marx, Capital, 1, p.718), but it was an inherent part of the mysticism of the wage-form that this situation, the essential unity of the necessary labour performed in the home with that performed in the factory, was hidden.)

Fortunati makes a similar point. The wage, she argues, becomes ‘the means of covering up the exploitation of the female houseworker’ (p. 92). She means exploitation by capital. In other words, capitalist exploitation extends beyond the boundaries of the factory to domestic labour. She describes the labour of both ‘housewives’ and sex workers as ‘indirectly waged labor’ engaged in the reproduction of labour-power. ‘Indirectly waged’ in the following sense: in families of wage-earning households dominated by male ‘breadwinners’, the relation of production within the family appears to be one in which ‘the man formally exchanges his wage for the living labor of the woman… The man buys the woman’s labor power with his wage’ (p. 31). In reality, however, what appears as an exchange between male workers and women (and thus a relation of simple circulation) is an exchange between women and capital, with the male workers simply acting as intermediaries. ‘[T]he personal services of the woman are bought with the aim of producing a commodity, labor-power. It is an exchange in which the male worker functions as the means through which capital acquires labor in its capacity for the production and reproduction of labor-power and in its capacity for the sexual reproduction of labor-power. There is no doubt that this dual exchange must re-enter the relation of complex circulation’, by which she means re-enter the reproduction process of the total social capital. ‘In fact it re-enters indirectly into the relation of complex circulation, but only insofar as it re-enters directly into that of simple circulation at the formal level. The result is that both housework and prostitution work—which appear to have had all value stripped from them by capital—do in reality valorize capital’ (pp. 54-55).

The Secret of Reproduction was seminal. It was the first piece of writing to try and develop the theory behind the Wages for Housework campaigns. It can be easily accessed in an English translation uploaded by libcom.org.

See the crowdfunding appeal to translate the unabridged version: https://www.toledotranslationfund.org/leopoldina_fortunati

Dalla Costa’s pamphlet ‘Women and the Subversion of the Community’ is available here: https://thecommoner.org/.../tribute-to-the-work-of.../
Rohini Hensman’s early intervention can be read here: https://www.historicalmaterialism.org/.../wage-labour...
Alessandra Mezzadri’s assessment of the second generation of ‘social reproduction theory’ can be found here: https://www.radicalphilosophy.com/issues/204