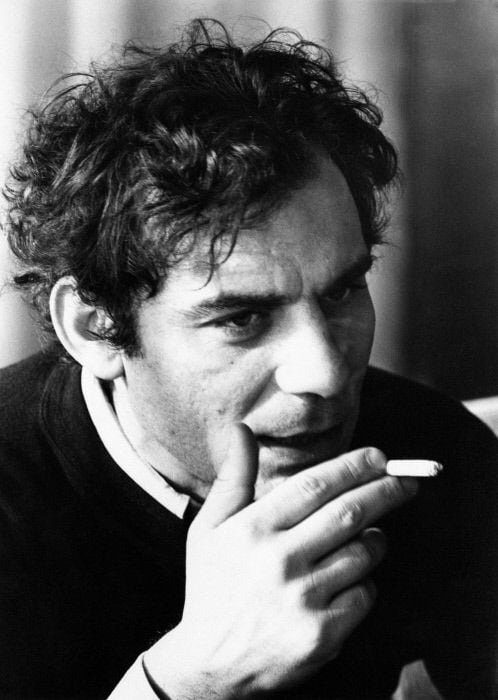 Well-known film stars who are (or were) committed left-wingers are hard to find. Gian Maria Volonté (1933–94) was probably the best example of this rare category. He was often called an “activist” and his political commitment described as “relentless”. In 1994 shortly after G.M.V. died, Oreste Scalzone, one of the founders of Potere Operaio who had been arrested in 1979 and “accused of planning armed attacks and plotting to overthrow the government”, revealed that it was Volonté who helped him to escape from Italy, from where he sailed to Corsica on a boat owned by the actor. (Scalzone later took French citizenship.)

As an actor, Volonté was both prolific and immensely creative, choosing his roles with an indelible sense of the politics behind them—in a string of overtly political films like We Still Kill the Old Way (Petri, 1967), Investigation of a Citizen Above Suspicion (Petri, 1970), Sacco & Vanzetti (Montaldo, 1971), The Mattei Affair (Rosi, 1972), Property Is No Longer Theft (Petri, 1973), Ogro (Pontecorvo, 1979), Christ Stopped at Eboli (Rosi, 1979), and The Moro Affair (Ferrara, 1986)!

“Nothing is more anarchic than power. Power does what it wants”, said Pasolini about his film Saló, something many of us in India can understand perfectly from the past six years or so. It is this theme (of the anarchy of power) that forms the thread of one of Volonté’s most powerful roles, the police inspector who murders his lover, implicates himself in the crime by leaving clues all over the flat, and then watches to see how his subordinates in the homicide squad investigate her murder—the story line of Elio Petri’s brilliant thriller Investigation of a Citizen Above Suspicion (1970).

Here’s a very short summary of the write-up in the link below. Volonté worked for major Italian directors from Sergio Leone and his spaghetti westerns to overtly left-leaning film makers like Francesco Rosi, Elio Petri, Gillo Pontecorvo, Damiano Damiani, and Giuseppe Ferrara. His performances were “dazzling” and his versatility astonishing. With the same “rigour and aptitude” he could play a worker as well as a businessman, an intellectual and a neurotically obsessed police commissioner, a revolutionary and a man of power. He starred in as many as four of Petri’s films, because each shared the other’s left-wing convictions, had a common “predilection for uncomfortable themes” and an equal drive to portray a country racked by corruption and social turmoil. The Petri/Volonté partnership was the basis on which Italian political cinema established its success in the seventies.

Investigation of a Citizen would win an academy award in 1971 as the “best foreign language film”, and Volonté himself would win numerous Italian awards for his portrayal of the police chief whom his colleagues referred to simply as “il Dottore”. (The far-left group Lotta Continua was quick to identify Volonté’s character as the police official Luigi Calabresi, who was widely held to be responsible for the death of the anarchist railway worker Giuseppe Pinelli, who, it was said, had “fallen out” of the fourth floor window of the Milan police headquarters shortly after being detained towards the middle of December 1969.)

Volonté’s collaboration with Petri would continue, with Investigation becoming part of a “trilogy of neurosis” in which Petri explores the pathologies of power, money and work in that order, treating them as the three pillars of the “newly enriched Italian middle class” that came out of the economic boom of the 1960s. Volonté was also directed by Francesco Rosi in several other roles, including that of the anti-Fascist writer Carlo Levi in Christ Stopped at Eboli (1979), a Bafta-winning performance based on Levi’s autobiographical account of his years in exile (in 1935–36) in the impoverished Italian South.

“Although Volonté died quite young (from a heart attack in Greece in 1994, while filming Ulysses’ Gaze...), he also boasts a long list of films and roles outside Italy. Among these Ogro, shot in 1979, the same year as Christ Stopped at Eboli. Written and directed by Gillo Pontecorvo, Ogro was based on true events of Operation Ogre, the name given by ETA to its assassination of Luis Carrero Blanco, Prime Minister of Spain in 1973. The final film worth mentioning is Il Caso Moro (The Moro Affair) by Giuseppe Ferrara in 1986, based on the Christian Democrat secretary’s kidnapping and execution by the Red Brigades. For this role he won best actor at the Berlin Film Festival in 1986. At the 1991 Venice Film Festival, Volonté’s outstanding contribution to European cinema was loudly proclaimed with a Golden Lion for career achievement.”

For an Italian video collective seeking to make a full-scale documentary on G.M.V. (“Forgotten militancy”), see