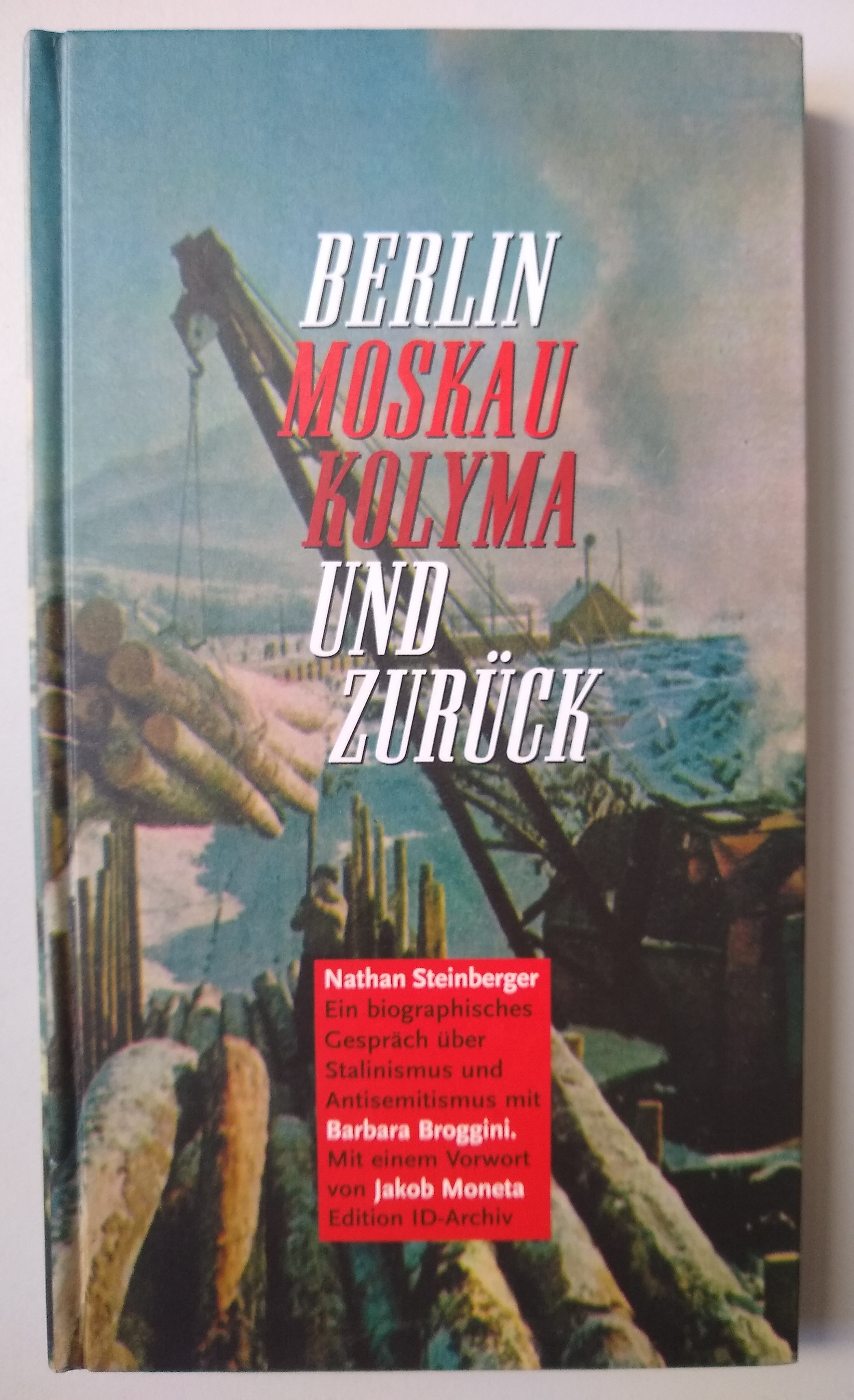 Growing up, antisemitism was a fact of daily life for Steinberger. ‘One knew which circles to avoid because antisemites gathered there’. The daily antisemitism present in the Weimar Germany was amplified, radicalised and eventually transformed into a programme of state-organised mass-murder by the Nazis. But antisemitism was not the reason Steinberger left Germany.

Steinberger studied in Berlin under supervision of Karl Wittfogel, then a prominent Marxist historian and KPD member. Wittfogel saw potential in Steinberger and recommended he continue his studies in the International Agrarian Institute in Moscow, a Comintern-led institute. A year before the Nazis came to power, Steinberger left for the Soviet Union. There, Steinberger wrote his dissertation on agricultural polices in Germany, a work published in 1935. However, he had made a grave mistake; the text lacked the mandatory praise of Stalin. Steinberger was lucky that KPD leader Wilhelm Pieck intervened and wrote an introduction that made sure to praise Stalin’s brilliant contributions to the field of agricultural policies.

By this time, the Nazis had firmly established their power in Germany. The KPD had moved its seat to Moscow and Steinberger’s German citizenship was revoked, both because he was Jewish and because he was a Communist. For many Communists and others persecuted by the Nazis, the Soviet Union seemed a logical place to seek refuge, but Soviet authorities were often unwilling to grant asylum. Even for those who succeeded in finding refuge in the Soviet Union, the situation became increasingly dangerous after 1935. As the Stalinist purges escalated, foreigners, Communists or not, came under suspicion of spying for their country of origin. In April 1938, KPD leader Paul Jäkel sent an urgent letter to the party leadership; ‘over 70 per cent of KPD-members have been arrested. If arrests continue at the pace of last March, in three weeks not a single party-member will remain’. Among those arrested the previous year already was Steinberger.

The socialist student organisation Steinberger had sympathised with as a teenager had been close to the dissident communist Karl Korsch. Now Steinberger was found guilty of ‘counter-revolutionary Trotskyite activities’. His arrest did not come as a shock; he had already been fired from the institute and prevented from finding a new job. Steinberger; ‘long before my arrest, I had insight into the reality of the Soviet Union and I had never been a Stalinist. I had no illusions that the Stalinist regime had anything to do with communism or socialism’. Steinberger was sentenced to five years in a labour camp and sent to Kolyma, in the far north-east.

The prisoners were made to do heavy labour such as mining gold. They were kept separate from other workers and worked under extremely harsh conditions. Discipline was maintained with summary executions. Signs of sympathy for the prisoners were criminalised, but small gestures of solidarity existed. On his way to the camp, Steinberger hid a small note that eventually found its way to his wife Edith; ‘A railroad worker had found it and sent it along – anonymously of course. Doing something like this meant taking a risk’.

In 1946, Steinberger was released from the camp, and his wife was allowed to rejoin him. He was however, sentenced to ‘perpetual exile’ in the northern Magandan region. Only after the death of Stalin, and the 20th Congress of the CPSU where Khrushchev made a partial criticism of the crimes of Stalin’s regime, was Steinberger released from exile and his party-membership restored. In 1955, he returned to East Berlin. Many of his comrades had not survived the purges and camps. ‘Of all my friends who looked for safety in the fatherland of the working class’, Steinberger remembered in 1996, ‘none had survived’.

After his return in Berlin, Steinberger joined the surviving small Jewish community. Steinberger remembered that, when he left Germany, he considered the Jewish community as something for people who clung to religion, but that he had come to see that an ‘association of Jewish people, regardless whether they are religiously Jewish or not, was necessary to able to face society as a human being’.

It was not only the memory of Nazism and the Shoah, in which family members and friends were killed, that made Steinberger re-evaluate his relationship to the Jewish community. During his years of exile, Steinberger heard news of the antisemitic campaigns of the last years of Stalin’s rule. The Jewish Anti-Fascist Committee, an organisation intended to mobilise international support for the Soviet war effort, became the target of an antisemitic campaign. Its members were denounced as ‘passportless wanderers’, their links with (Jewish) US Communists and fellow-travellers held against them as evidence of treason. During the so-called ‘Night of the Murdered Poets’ of 12 August 1952, thirteen JAC members, among them prominent Yiddish writers, were executed.

The case of the JAC led to what Isaac Deutscher described as the ‘sordid spectacle’ of the ‘doctor’s plot’; a group of mainly Jewish doctors was accused of planning to murder leading Soviet officials, Stalin himself among them, in cooperation with Western intelligence services and the Jewish humanitarian organisation The Joint. The Soviet press emphasised the Jewish background of the accused and unleashed a campaign against ‘bourgeois Jewish nationalism’ and ‘rootless cosmopolitans’. As hostility against Jews increased, rumours circulated that mass deportations were planned. In Steinberger’s circles, the so-called plot was ‘seen as a lie that was to have been the pretext to arresting and deporting millions of people’.

Stalin’s death prevented further escalation – a few weeks after he expired, all the accused were amnestied and the investigation in what was supposed to have been an immense conspiracy was abandoned for lack of any evidence.

Not all of Steinberger’s ideals survived his experience in the Soviet Union. Decades later, he recalled how, as a youth, he thought that the socialist revolution would end antisemitism – something he had come to see as ‘nonsense’. To confront antisemitism, the Jewish people needed a state of their own, meaning Israel. He described how a people without a state is defenceless and referred to the oppression of the Kurds as an example – unfortunately, the interviewer didn’t ask what this meant for another stateless people, the Palestinians.

Although Steinberger was rehabilitated and a member of the ruling SED, he was still monitored by the Stasi and not allowed to speak of his experiences in the Soviet Union. Violating this ban cost him his job in the state planning commission, after which he found work teaching economics. Inside the GDR, Steinberger was in contact with critical Marxists such as the economist Friedrich Behrens. Outside the GDR, Steinberger had contact in West-Germany with the Marxist and agronomist Theodor Bergmann and the socialist trade-unionist and publicist Jakob Moneta, and, internationally, through a brother living in Brussels, with the Belgian Marxist economist Ernest Mandel.

The historian Mario Keßler has written how, in 1988, Steinberger took the unprecedented step of harshly criticising Stalinism, in a public meeting, in Western Germany. Without asking for permission (knowing this would not be granted anyway), Steinberger travelled to an international congress dedicated to the life and work of Nikolai Bucharin, where he denounced how Stalin’s ‘system of terror’ had liquidated the workers’ democracy won in the October Revolution and exterminated its leaders. A brief moment of hope came with the rise of the opposition movement in the GDR; ‘of course I wanted to see an overthrow – but this would have been possibly only if there had been a transformation in the West as well’.

After the implosion of the Eastern bloc disoriented the international Left, Steinberger emphasised that what had ended there had nothing to do with socialism. When asked what a socialist society was supposed to look like, he refused to give precise prescriptions but referenced the slogan of the French revolution, ‘Liberté, egalité, fraternité’; ‘I cannot translate that in an image of what socialism should look like. But I know the principles of the French revolution are building blocks, the Commune is a building block as is the October revolution’.

Steinberger was one of the over 1,100 German victims of the Stalinist terror described in In den Fängen des NKWD, a 1991 book published by the former publishing house of SED. This led a few years later to the publication of Berlin Moskau Kolyma und zuruck: Ein Gesprach uber Stalinismus und Antisemitismus, a biographical interview from which many of the quotes here are drawn.

On his last birthday, Keßler remembered, Steinberger expressed how friendship, solidarity and the hope for a humanist socialism helped him overcome all the hardships in his long live. Keeping this hope alive until the end, Steinberger passed away on 26 February 2005.