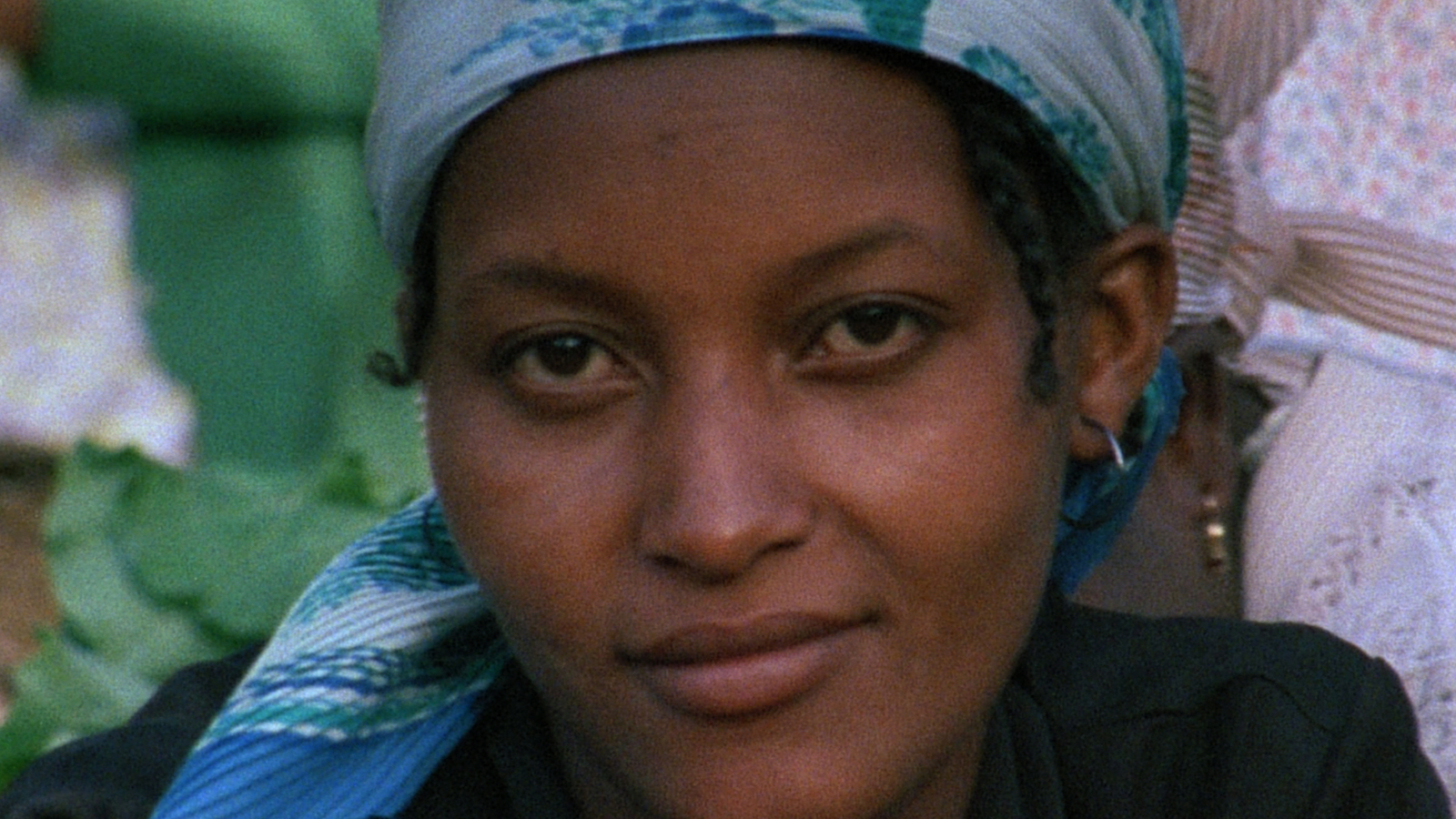 "We do not remember. We rewrite memory much as history is rewritten. How can one remember thirst?" Chris Marker, Sans Soleil (1982).

The photo shows a still from the footage for Sans Soleil which Marker shot in the market at Praia, capital of Cape Verde, in the early 1980s. It figures as one of the photographic portraits in Staring Back (2007), where it is distilled from the film and stripped of its colour (reduced to black & white).

So, if images have to have captions, let’s call this one, ‘The woman in the market at Praia’, and agree it’s more fascinating than any Mona Lisa that has ever been painted. Marker was deeply impressed by it, because much of what he says about photography in Sans Soleil revolves around this single image, and the commentary comes back to it at the very end as if to say the man who this film is about (viz. Marker) simply can’t forget it.

“Frankly, have you ever heard of anything stupider than to tell people, as they do in film schools, not to look at the camera?”

More revealingly, the voiceover tells us, “My personal problem is more specific: how to film the women of Bissau? Apparently, the magical function of the eye was working against me there. It was in the marketplaces of Bissau and Cape Verde that I could stare at them again with equality: I see her, she saw me, she knows that I see her, she drops me her glance (elle m’offre son regard), but just at an angle where it is still possible to act as though it was not addressed to me, and at the end the real glance (le vrai regard), straightforward, that lasted a twenty-fourth of a second, the length of a film frame (le temps d’une image)”.

He praised a bar in Namidabashi, Tokyo, because “[i]t’s the kind of place that allows people to stare at each other with equality”. Yet, later in his life, Marker was less sanguine. Another photographer has said about him, “In  the last years of his life, Marker increasingly turned his attention to photography, photographic books and installations. In 2006 he mined his own archive of film stills and photographs to organize the book and exhibition Staring Back… As is suggested by the title, the subjects of many of the images stare back at Marker. Aware of the predatory nature of photography he questions the asymmetry of this photographic act. ‘We exchanged looks, as one says, but what did they get in exchange? Me like a fast pickpocket running away with my bounty…’” (Durant, “Staring at Chris Marker”).

About his fascination with faces, he explained that what he wanted to capture was “the everlasting face of solitude”.

Sunless, described as Marker’s “quintessential film”, his “tour de force as a cinematic essayist”, is a visual autobiography constructed obliquely through a double disguise (the voiceover of a fictitious narrator reading the letters of a fictitious cameraman Sandor Krasna, from the 40th century; their names figure in the credits at the end!), a travelogue that moves back and forth between Japan and Guinea Bissau, the “two extreme poles of survival” (surviving abundance and surviving poverty).  The editing is dense and supple, as critics have said, but the power of the film lies in its meditation on the themes of photography/film, history and memory.

On memory; “I remember that month of January in Tokyo, or rather I remember the images I filmed of the month of January in Tokyo. They have substituted themselves for my memory. They are my memory. I wonder how people remember things who don’t film, don’t photograph, don’t tape. How has mankind managed to remember? I know: it wrote the Bible. The new Bible will be an eternal magnetic tape of a time that will have to reread itself constantly just to know it existed”.

In other words, “In Sans soleil memories are manifested as film images, with the distinction between subjective memory and visible image erased” (Lupton, “Shock of the old”, p.42). “Memory continually fabricates new versions of past events to suit the immediate interests of the present… Marker’s films abound with incisive interrogations of the multitude of experiences that get repressed or denied in the interest of manufacturing history and national identity” (Lupton, “Memory’s Apostle”).

Which takes us to history. By 1982, it is Benjamin’s sense of history as one single catastrophe which keeps piling wreckage upon wreckage that dominates Marker’s own idea of history. The wave of optimism that fuelled the revolutionary hopes of the sixties had receded sharply. As Marker told Colin MacCabe in 2010, “everywhere the left was in crisis. But in Guinea-Bissau there was still something I could believe in, in spite of the coup”. (Amílcar Cabral’s half-brother Luís was overthrown in a coup in 1980, destroying the promise of a successful revolutionary struggle.) Voiceover: “Why should so small a country—and one so poor—interest the world? They did what they could, they freed themselves, they chased out the Portuguese. They traumatized the Portuguese army to such an extent that it gave rise to a movement that overthrew the dictatorship (in Portugal), and led one for a moment to believe in a new revolution in Europe”.

The voiceover remarks acerbically, “Who remembers all that? History throws its empty bottles out of the window”. Marker argues at this point that no revolutionary leadership is ever truly collective. He quotes the Portuguese novelist Miguel Torga, “Every protagonist represents only himself”. Then the voiceover continues in these profoundly disillusioned terms:  “That’s the way the breakers recede. And so predictably that one has to believe in a kind of amnesia of the future that history distributes through mercy or calculation to those whom it recruits: Amilcar murdered by members of his own party, the liberated areas fallen under the yoke of bloody petty tyrants...That’s how history advances, plugging its memory as one plugs one’s ears… She doesn't care, she understands nothing, she has only one friend, the one Brando spoke of in Apocalypse: horror”.

The English subtitles to the version available from Amazon Prime aren’t a reliable guide to Marker’s text, which can be found here: https://www.markertext.com/sans_soleil.htm

For the interview with MacCabe, https://chrismarker.org/chris-marker/interview-fragment/

and for Marker’s legacy in Guinean cinema, https://www.internationaleonline.org/research/decolonising_practices/59_a_grin_without_marker/