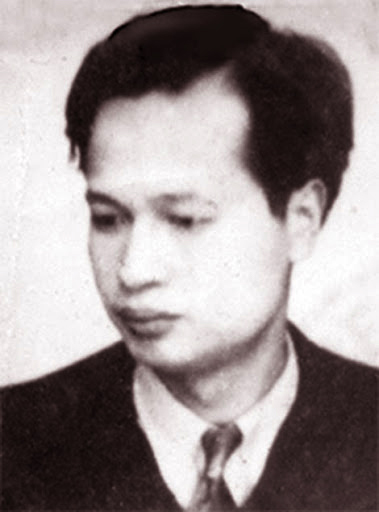 Tran Duc Thao (1917–1993) joined the École Normale Supérieure in 1939 and worked on Husserl under the supervision of Jean Cavaillès. Much later he would write,

“In 1941-42 I did my thesis on Husserl’s method with Jean Cavaillès. Merleau-Ponty was emphatic about the cardinal importance of (Husserl’s) Erfahrung und Urteil and Krisis to any (future) attempt to reorient the phenomenology of essences in the direction of a theory of time rooted in a history creative of forms [vers une théorie de la temporalisation dans une histoire créatrice de forms]. In the light of our experience of the war, one increasingly felt that such a tendency would realize itself in the Marxist conception. But the latter was barely visible at this time except on the hazy horizon of the kind of eclecticism typical of intellectuals.”

Thao’s early dissertation on Husserl was completed in 1942. When the decision to establish Husserl’s archive (some 15,000+ pages in manuscript or cyclostyled form, none of it published) was taken in Paris in that year, the committee that took charge of this project consisted of Merleau-Ponty, Jean Cavaillès, Jean Hyppolite and Tran Duc Thao. Cavaillès had attended Husserl’s lectures at the Sorbonne in 1929 and was the oldest member of this group; Thao, only 25 then and a foreigner, its youngest. About the latter’s dissertation Cavaillès told Léon Brunschvig, “Thao has written a superb mémoire on Husserl, a Husserl who’s been somewhat Hegelianised”. Of the total holdings of Husserl’s unpublished work only some 5,000 pages were eventually brought to Paris, in 1944–46, thanks largely to Thao, with Merleau-Ponty’s personal assurance. It was these manuscripts that Thao studied and used for the seminal 1951 book called Phénoménologie et matérialisme dialectique. But, by 1958, when the Husserl archive was formally established in Paris, Thao himself had been gone six or seven years, having returned to Vietnam to work for the revolution going on in his country.

Despite his abiding interest in phenomenology, Thao saw himself as a committed Marxist. Already in 1948, he had “penned a celebrated article for Les temps modernes on the Franco-Russian philosopher Alexandre Kojève in which he argued for the superiority of Marx over Hegel”. And, along with other Vietnamese in France, he had “campaigned in support of the Vietnamese revolution”, contributing articles on colonialism and Indochina to Les temps modernes. It has even been said that Thao was the leading figure in the journal’s opposition to colonialism (McHale, “Vietnamese Marxism, Dissent, and the Politics of Postcolonial Memory”, p. 10).

What follows on Thao’s experiences back in Vietnam is taken from McHale’s revealing article on Thao. By the mid-fifties, a few years after his return, Tran Duc Thao was contributing articles to the periodical Nhan van (Humanity) attacking Party abuses and calling for more democracy. His name was expunged from the historical record in these years and only came up again in 1958 when he was forced to “self-criticise” and subjected in fact to a second self-criticism when the first was scathingly rejected.

Thao’s Marxism was distinguished, unusually, by the “greater attention (he paid) to questions of individual rights, responsibilities, and freedoms” (p. 15). McHale explains that he distinguished between the content of freedom and its form, arguing that, while the Vietnamese had overthrown French imperialism and were, in that sense, free (in content), “the form of freedom is individual freedom” and this meant having the rights of free speech, right of assembly, and freedom of the press. Secondly, while Thao had come around to seeing labour and thus class as the arena of struggle even as early as 1948 in his essay on Kojève, he paid no attention to the role of parties. McHale writes, “throughout his later writing, one can sense that to Thao, the Party is secondary to the people: the people are the vanguard of history, and the Party gets in trouble when it forgets that elementary fact” (p. 16).

In October 1956 Thao had called on the Vietnamese Workers’ Party to struggle against bureaucracy, factionalism, and the cult of personality. “These maladies were widespread in society ‘but only in the leadership do they have the capacity to cause great harm to the people’” (pp. 16–18). The backlash to these criticisms meant that Thao became “a victim of the 1956-58 crackdown on dissidents, and is mostly forgotten in the larger sweep of Vietnamese history” (p. 18). The dissidents were, of course, denounced as “Trotskyists”.

Thao himself was stripped of his university position and forced to leave public life permanently. “[H]e later noted how, "paralyzed," he was unable to "speak" for years… Until the 1980s, he was forced to live alone and in poverty. His father was dead, and his wife, apparently under pressure, divorced him” (pp. 22–23). McHale finally notes that “Tran Duc Thao’s situation improved in the late 1980s. He was allowed to travel to France. In 1989, a time of openness, the regime allowed Thao to publish a book in Vietnamese attacking Althusserian anti-humanism” (p. 23). He died on 24 April 1993 in Paris. In 2001, the Vietnamese government announced that it was awarding Thao the Ho Chi Minh prize posthumously.

A final comment; “Tran Duc Thao framed the debate over what it meant to be Vietnamese in clearly modernist terms, and decisively rejected the notion that alternative Vietnamese ways of perceiving reality were valid. He shared the same incomprehension as the Communist Party for Buddhism, Confucianism, and "superstitions."” (p. 24).

Since jstor has thrown open its holdings, McHale’s paper can be read online here: https://www.jstor.org/stable/2700187