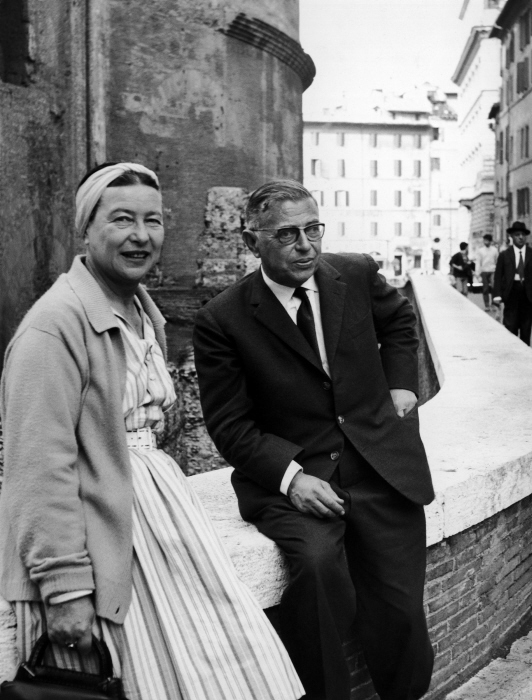 In his Critique of Dialectical Reason, Sartre recasts Marx’s notion of alienation as our experience of the practico-inert. Alienation, Sartre suggests, is our ‘experience of the materialised result’. ‘It is no longer the positive moment in which one does, but the negative moment in which one is produced in passivity by what the practico-inert ensemble makes out of what one has just made’ (vol. 1, p. 337). If we say, the worker produces capital, then that is simply a shorthand way of saying what Sartre has just said. ‘What one has just made’, the product of one’s labour, becomes capital (a commodity that belongs to the capitalist) thanks to capital (thanks to a ‘practico-inert ensemble’ which is the accumulation of capital and the system bound up with it). As a wage labourer the worker is a ‘worked Thing’ (p.325), and as capital ‘worked matter’ is the ‘inert meaning of the worker’ (p. 328).

In factory production the worker is ‘the object of the machine’. The worker adapts to the machine, destroying his/her own bodily rhythms by ‘interiorising a rhythm which is absolutely other [alien]’ (p. 325) By the time Sartre comes to write this, in his chapter on “Collectives” (that is, all those objects which are typical of the social field or of social life), he has redefined freedom in a major way. ‘In other words, freedom, in this context, does not mean the possibility of choice, but the necessity of living these constraints [e.g. of having to go into employment] in the form of exigencies which must be fulfilled by a praxis’ (p. 326).

‘Exigency’ becomes a crucial category of the Critique as Sartre’s way of characterising the way we experience and respond to the force of materiality (of the practico-inert) or to what he calls the ‘anti-dialectic’, that is, that huge sector of human experience sandwiched between individual action (my freedom as a real agent) and the action of groups (which, of course, is sustained by individuals and by their freedom as practical organisms, since the group is not an organism of any sort). The anti-dialectic is replete with ‘monstrous forces’ (p. 319).

Close to 200 pages of the first volume of the Critique (pp. 153–341) expound Sartre’s theory of ‘worked matter’. In these pages, four ideas or sets of ideas are specially worth noting:

1. That of the exigency of matter, or of the exigency of inanimate objects as a sort of ‘inert, imposed finality’. Take this example: machines determine how jobs are done; they determine job classifications and skill hierarchies, and, through these, the very structure of the working class as well as the limits of class-action; through the way jobs are designed they even determine whether and how much workers fantasise on the job. ‘When semi-automatic machines were first introduced, investigations showed that specialised [semi-skilled] women workers indulged in sexual fantasies as they worked: they recalled their bedrooms, their beds, the previous night… But it was the machine in them which was dreaming of love: the kind of attention demanded by their work allowed them neither distraction (thinking of something else) nor total mental application (thinking would slow down their movements). The machine demands and creates in the worker an inverted semi-automatism which complements it : an explosive mixture of unconsciousness and vigilance. The mind is absorbed but not used…’ (p. 233)

2. That of matter producing its own idea, e.g., the ‘inert idea’ inscribed on every bar of Spanish gold, the idea that gold is the chief form of wealth (the delusion of Mercantilism); Another example: craft unionism as the universal machine’s idea of itself.

3. The notion of class as Being or of Class Being, that is, of social being as materiality, of the materiality of class and of class as one’s ‘prefabricated reality’ and ‘destiny’.

4. The all-important notion of what he calls “collectives”. Unlike groups, which are practical ensembles (practical organisations) and can do and say things, collectives are practico-inert objects, hence purely material and inorganic, despite appearances to the contrary. The collective (in Sartre’s sense) is a ‘sort of scale model of the practico-inert field’ and of the ‘passive activity’ that goes on in it: newspapers, offices, cafés, apartment blocks, banks, etc. are all ‘collectives’ in Sartre’s meaning of this term, so is class, so is the economic system (capital!), so are markets, and so is ‘public opinion’.

In complete contrast to Thompson, Sartre argues that class or the class-collective ‘is not a practical solidarity but, on the contrary, the absolute unity of destinies brought about by lack of solidarity’. ‘Every small organised group feels its own class as a universal flight, which neutralises all its efforts’ (p. 312). The far left groups in Britain could hardly disagree with this, even if they’d like to do so.

Like class, ‘nation’ is for each of us ‘our being-outside-ourselves in matter, in so far as this produces us and awaits us from birth’ (p. 2389). As a collective or practico-inert ensemble, the nation can do nothing. It doesn’t speak, it doesn’t ‘want to know’, and it certainly doesn’t say who is and isn’t ‘anti-national’. All that is done by groups, usually highly organised groups who claim to speak for an ensemble (‘the nation’) that is merely a passive synthesis, purely material, hence motionless and speechless. The sleight of hand in nationalism (all varieties) is the illusion that nations exist and act in the same sense in which the organised groups constructing them, speaking (fictitiously) on their behalf/ in their name, do.

One way of resisting fascism is to train ourselves to think clearly.