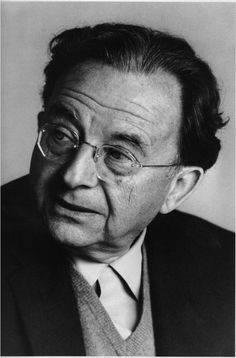 Erich Fromm (1900–1980), German-American social psychologist and philosopher, and a fine exemplar of the Weimar psychoanalytic Left. The Frankfurt Institute’s massive survey of German working-class attitudes was led by Fromm, but in 1930 when the survey was conducted ‘The questions failed to register anti-semitism or ethnocentrism; the staff did not yet appreciate how important these sentiments were to Hitler’s appeal’, says his biographer Lawrence Friedman (The Lives of Erich Fromm, p. 42). This would change radically in the next few years as Fromm developed a deeper understanding of the real groundwork of fascism.

‘Ask an average newspaper reader what he thinks about a certain political question. He will give you as “his” opinion a more or less exact account of what he has read [in the papers], and yet – and this is the essential point – he believes that what he is saying is the result of his own thinking.’

This striking observation is part of Fromm’s later discussion of the kind of mass subjectivity presupposed in the appeal of fascism. The two central chapters of his book Fear of Freedom (in the U.S. Escape from Freedom, 1941) confront the issue in ways reminiscent of Wilhelm Reich but without the obsessive importance Reich himself ascribed to sexuality.

Fromm makes it clear that ‘psychological conditions were not the “cause” of Nazism’, but (and this is crucial) they ‘constituted its human basis without which it could not have developed’ (p. 188). He makes it quite clear that ‘any analysis of…the rise and victory of Nazism must deal with the strictly economic and political, as well as with the psychological, conditions’. Fromm’s approach to fascism was thus avowedly non-reductive, anticipating the sort of totalising method Sartre would later argue for in The Problem of Method.

In dealing with the problem of why fascism seems to appeal to large masses of people when it is manifestly contrary to their economic interests, Fromm develops an argument that can be broken down into four major planks, all of them fascinating. (1) A strictly psychological one relating to what he calls the ‘authoritarian character’ (where ‘character’ is used in the dynamic sense in which Freud speaks of character) . (2) An argument about the kind of pedagogy that favours fascism. (3) A characterization of Nazi ideology where the idea of the Nazis as the self-appointed incarnations of a national community plays a key role. And (4) his argument about the correlation of all this in purely class terms, the notion that the ‘authoritarian character’ was ‘typical for the lower middle class’ (which doesn’t mean it wasn’t found elsewhere as well, e.g. among workers).

Fromm substituted the term ‘authoritarian character’ for what others in Freud’s school had called the ‘sado-masochistic’ personality-type, to avoid the pathological connotations of the latter term. The character is one that ‘admires authority and tends to submit to it, but at the same time he wants to be an authority himself and have others submit to him’ (p. 141). ‘Power fascinates him…just because it is power.’ ‘Just as his “love” is automatically aroused by power, so powerless people or institutions automatically arouse his contempt. The very sight of a powerless person makes him want to attack, dominate, humiliate him[/her].’ (p. 145) (Think of the numerous attacks on dalits, women, adivasis, and Muslims in India.) Even when fighting authority, this guy retains a ‘longing for submission’ (p. 146). The ambiguity at the heart of this character-structure is its simultaneous ‘craving for submission (to authority) as well as domination over those who were powerless’ (p. 190).

On pedagogy, a culture of education that institutionalises the ‘suppression of critical thinking’ from an early age (India again!) paves the way for fascism (not in the sense that this will inevitably result but in the more obvious sense that it can easily emerge….). Here Fromm draws a crucial distinction between ‘pseudo thinking’ (exemplified in the quote I started with) and ‘active thinking’. ‘The decisive point is not what (italics) is thought but how (italics) it is thought. The thought that is the result of active thinking is always new and original...’, not because no one has said the same thing before but in the sense that you’ve actually come up with it independently, for yourself (p. 168). Again, there is a strong resonance of all this in Sartre’s distinction between ‘praxis’ (which is inseparable from active thinking) and the ‘practico-inert’ (which includes ideas as inert objects).

Nazi ideology was distinguished by ‘its spirit of blind obedience to a leader and of hatred against racial and political minorities, its craving for conquest and domination, its exaltation of the German people…’ (p. 182). But the most original aspect of Fromm’s argument at this level is his notion that the Nazis transformed the middle class’s ‘feeling of powerlessness, anxiety and isolation’ into the yearning for a wider, national, community which led them to identify Germany with the Nazis, so that ‘persons who are not Nazis nevertheless defend Nazism against criticism [by] foreigners because they feel that an attack on Nazism is an attack on Germany’ (p. 182). This is what the Volksgemeinschaft was, not just propaganda or abstract ideology but a powerful nationalist incarnation of the kind that Trump currently seeks to create and build on with his own racially-tinged, xenophobic, authoritarian nationalism.