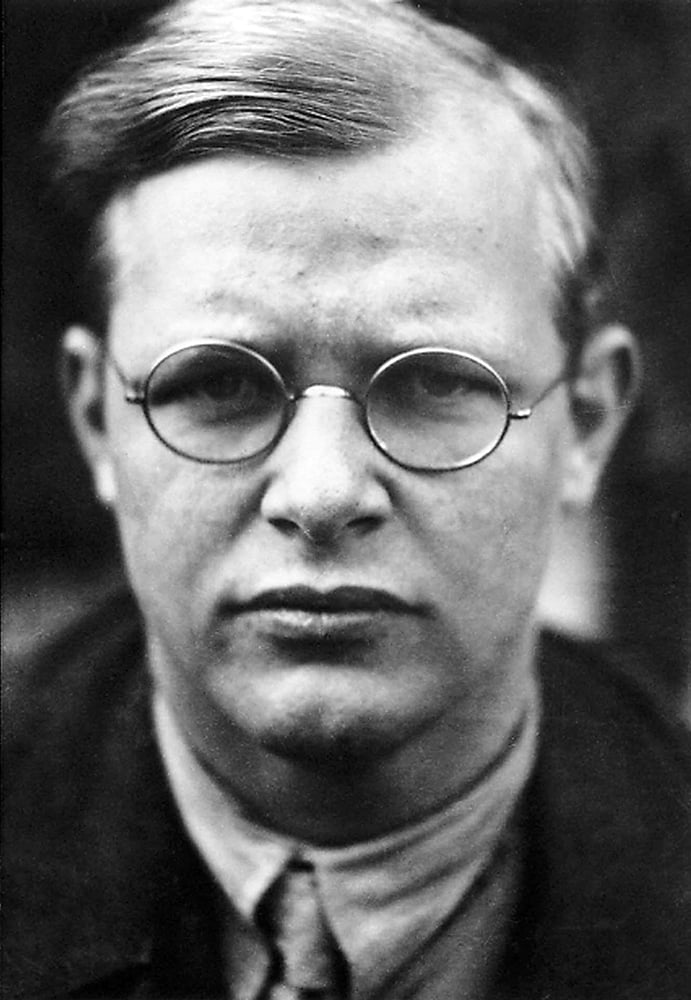 Dietrich Bonhoeffer (1906–1945), the great German theologian who was executed by the Nazis in 1945. He was arrested by the Gestapo in April 1943 and hanged exactly two years later (at Flossenbürg concentration camp), accused of associating with the group that conspired to assassinate Hitler in July 1944. Tragically, his execution took place just three weeks before Hitler killed himself.

Although he came from a semi-aristocratic family, Dietrich and his brothers were very clearly sympathisers of the broad left in Germany. For example, Rumscheidt tells us—

The Bonhoeffers had come to know Karl Marx's thought through their acquaintance with socialism rather than vice versa. Dietrich's older brother Klaus, executed by the Nazis two weeks after Dietrich for his part in the conspiracy against Hitler, had studied Das Kapital with care at the time when Dietrich began to manifest interest in the political events in Berlin following the defeat in 1918. Bonhoeffer depicts that legacy in a fascinating passage in his Christology lectures of 1933: “What does it mean when proletarians say, in their world of distrust, 'Jesus was a good man'? It means that nobody needs to mistrust him. Proletarians do not say, 'Jesus is God.' But in saying 'Jesus was a good man' they definitely say more than the bourgeois when they repeat, 'Jesus is God.' God is something for the proletarians that belongs to the church. But, Jesus can be present on the factory floor as a socialist; in political engagement, as an idealist; in the proletarians' world, as a good man. He fights with them in their ranks against the enemy, Capitalism.”

The excursus on the church and the proletariat in Sanctorum Communio also indicates how Bonhoeffer had been engaged by Marxist-socialist reflection on the problem of capitalist economies. (The reference here is to Bonhoeffer, Sanctorum Communio, 1986, pp. 290-3.)

(The extracts are from Martin Rumscheidt, ‘The Formation of Bonhoeffer’s Theology’, in The Cambridge Companion to Dietrich Bonhoeffer, pp. 65-66)

It was Klaus, his older brother, and his brother-in-law Hans von Dohnanyi who involved Bonhoeffer in a movement of resistance that included the killing of Hitler. How did he view his decision to be part of that? In the final chapter of his book Peace and Violence in the Ethics of Dietrich Bonhoeffer (2016), Palmisano confronts the issue head on:

When asked by his brother-in-law, Dohnanyi, if it is wrong for a Christian to murder another, Bonhoeffer tells him that “murder is still murder.” This is no direct answer to Dohnanyi’s question of right or wrongdoing. However, Bonhoeffer was reported to say that Hitler’s murder was one of necessity and that one must be prepared to take the guilt of this sin on himself. Here there is no absolute condemnation of the act, only the warning of being prepared to bear this act as sin. Behind this response is the developing theology in Ethics, where Bonhoeffer analyzes the nature of guilt as an act of responsibility, not of dishonor (p. 123).

Another incident in the oral tradition recalled by Wolf-Dieter Zimmermann regards a conversation between the conspirators that took place in Zimmermann’s own home in November 1942. Here, Werner von Haeften, who was executed shortly after the failed July 20, 1944 plot against Hitler, asked Bonhoeffer whether he “should” and “may” shoot Hitler. Von Haeften had unparalleled access to Hitler at the time and felt a personal responsibility to go through with the act. Bonhoeffer’s advice, as Zimmerman recalls, diminished the value of divine permission for a sinful act. Instead, Bonhoeffer was concerned with the ability of the plan to be executed. Yet, as he did address the question of guilt, he indicated that nobody acting responsibly can escape it and that a person would experience guilt no matter which way he chose. (p. 124.)

Palmisano goes on to argue that renaming the assassination of a despot or dictator as ‘tyrannicide’ rather than murder is a subterfuge. Tyrannicide is still murder. The (abortive) assassination of Hitler was an act chosen in full freedom, and chosen, therefore, as an act for which the doer assumed full responsibility, given Bonhoeffer’s belief that ‘freedom can exist only in responsibility’. That statement comes from his Ethics, the great magnum opus which he worked on in the early 1940s but never completed since it lay on his desk as he was arrested. In that work, a few pages earlier he had written, reflecting surely on his own course of action, ‘Those who in acting responsibly take on guilt—which is inescapable for any responsible person—place this guilt on themselves, not on someone else; they stand up for it and take responsibility for it’ (cited p. 137). Or again, ‘Those who act responsibly become guilty without sin’ (p. 143).

In the last years of his life, Bonhoeffer’s Christology acquired an existentialist cast strongly reminiscent of the positions Sartre would argue towards the end of that decade, in writings like Les mains sales (Dirty Hands). In one of his last writings shortly before his arrest and jailing in Tegel Prison in Berlin (‘After Ten Years’, Christmas 1942), he wrote, ‘Surely there has never been a generation in the course of human history with so little ground under its feet as our own’. It is hard to imagine greater anguish than that suffered quietly by Bonhoeffer as he engaged in redefining the ethics of Christianity by his radical rejection of a notion of moral absolutes. ‘In the almost fifty years that I worked as a doctor, I have hardly ever seen a man die so entirely subject to the will of God’, said the camp doctor who witnessed his execution on 9 April 1945.