Facing the Abyss: An Epoch of Permanent War and Counterrevolution

School of Oriental and African Studies

The war in Ukraine is a brutal and tragic reminder of the fact that imperial ambitions, inter-imperialist rivalry, and nationalism can easily escalate into open warfare, in ways that risk generalised conflict. The world is again divided, but, on all sides of the new divisions, one can see the same patterns of capitalist exploitation, state oppression, ideological manipulation, radicalisation to the right, militarism and political cynicism.

At the same time, both the impending climate catastrophe and the Covid-19 pandemic have brought to the fore how the very dynamics of capitalist accumulation – despite all the rhetoric regarding a “Green Transition” – endanger the very possibility of survival on the planet.

This is combined with a profound ideological and cultural crisis, exemplified in the neoliberal homogenisation of both centre-right and centre-left, the increased appeal of the far-right, and the strategic crisis of the parties that were presented as “left alternatives.”

Against this descent into the abyss of permanent war and counterrevolution, there has been resistance, including instances of large-scale movements. However, these remain dispersed, fragmented, and still without the kind of articulation that would bring together the anti-war mobilisations, the struggle against climate disaster, the movements against neoliberalism, the messages of hope coming from countries such as Chile, and the fight against racism and patriarchy.

The collective effort to build a global movement that could attempt to articulate an alternative to this situation requires resources that are not only social and political, but also theoretical. We need to understand the state of the world, the changes of class composition, the dynamics and contradictions of accumulation, the forms of imperialist aggression and rivalry, the evolution of state apparatuses, and the changes in the ideological balance of forces.

This means that we urgently need a new wave of Marxist research and debate on all these questions. And we hope that the 2022 London Historical Materialism Conference can contribute to this.

After two years of successful on-line events, this year’s conference returns to the in-person format. We believe that an in-person conference offers a unique and irreplaceable form that brings together comrades, enables discussion, helps the dissemination of new and original research, creates research networks and communities, and builds solidarity.

As in the past, the conference ethos is strictly egalitarian – that means everyone is invited to contribute in a comradely spirit, the conference is open to all currents of critical Marxist theory and we expect all presenters to attend the entire conference, not just their own session (with no “cameo appearances”). The conference is an important part of the broader Historical Materialism project - including the journal, the book series, and the global network of HM conferences – and we want to encourage all conference participants to get involved with these different elements, for example by submitting their conference paper to the journal. 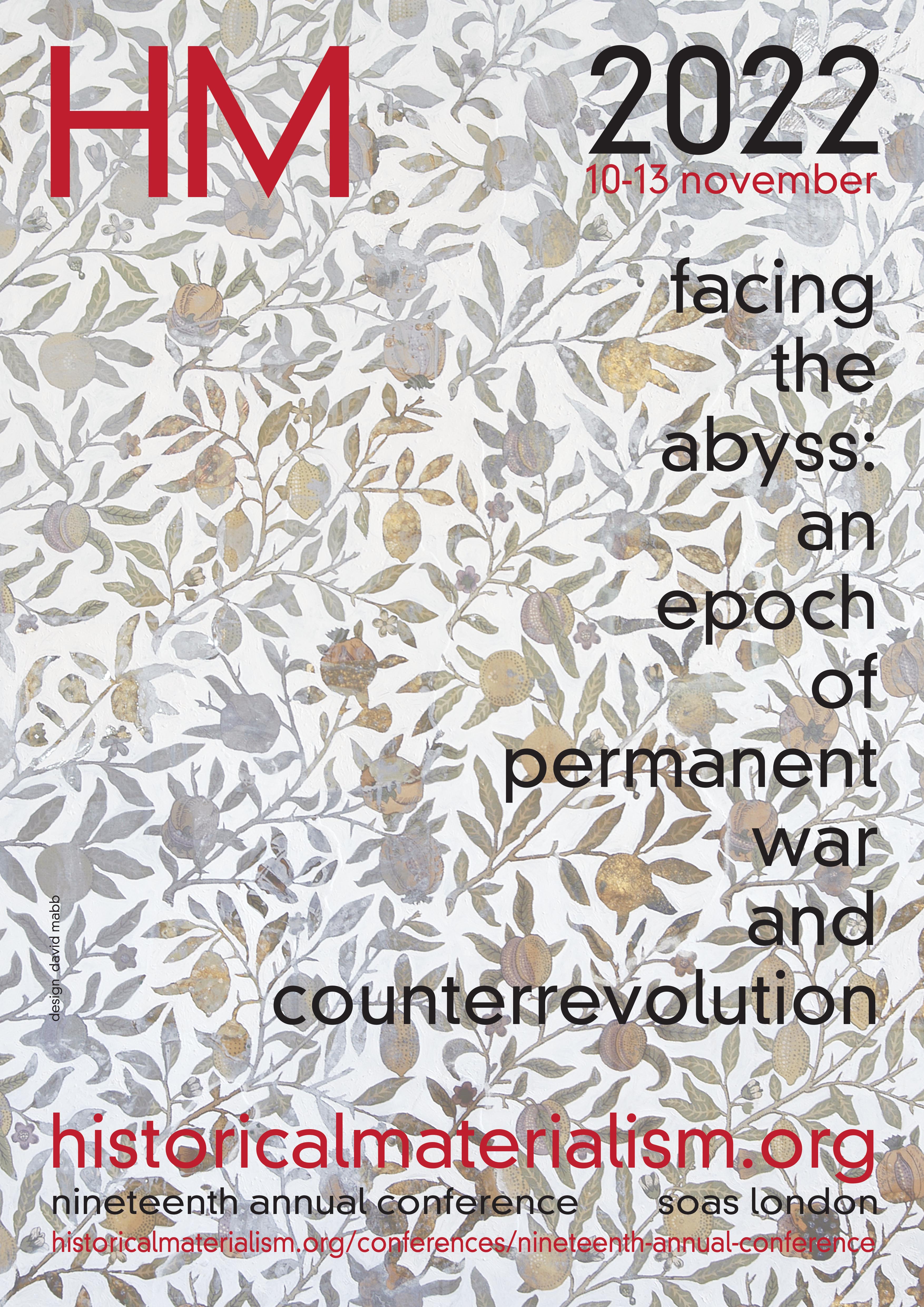 Register and pay online at a reduced price: https://conference.historicalmaterialism.org/

The conference is financed entirely through your contributions.

***This year, the conference will be taking place in a particularly onerous financial context, due to an unprecedented 20,000 pound room rental rate. Thus, for this not to sink the journal and imperil any possibility of another conference in London in the future, we are calling on all comrades to be generous and to suggest any possible grant possibilities.***