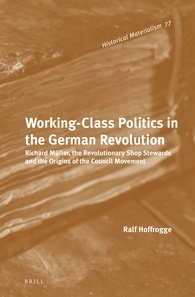 Richard Müller, the Revolutionary Shop Stewards and the Origins of the Council Movement

Richard Müller, a leading figure of the German Revolution in 1918, is unknown today. As the operator and unionist who represented Berlin’s metalworkers, he was main organiser of the ‘Revolutionary Stewards’, a clandestine network that organised a series of mass strikes between 1916 and 1918. With strong support in the factories, the Revolutionary Stewards were the driving force of the Revolution. By telling Müller's story, this study gives a very different account of the revolutionary birth of the Weimar Republic. Using new archival sources and abandoning the traditional focus on the history of political parties, Ralf Hoffrogge zooms in on working class politics on the shop floor and its contribution to social change.

Readers interested in the history of Germany, its role in the First World War and the German Revolution, scholars and students interested in working class history, dissenting Marxism and comparative studies on labour relations.

"Hoffrogge’s biography differs from those written about revolutionary icons like Liebknecht or Luxemburg for very practical reasons. The latter were from middle-class backgrounds and used to writing letters and articles offering biographers insights into their political but also private lives. An ordinary worker like Müller did not leave comparable records. […] For a book that is not about Müller the great individual but about one worker as first among equals, this absence of detailed private records is actually quite apt. It reflects workers’ subordinate position in capitalist societies. What made these equals, the Revolutionary Shop Stewards, so interesting is that they had a capacity to mobilize rank-and-file workers in large numbers because, unlike many of the Spartacists, they worked alongside them and knew when they were ready for action, but also when they were hesitant, anxious, or subdued.
Hoffrogge’s book is a first-rate invitation to think about a link between Richard Müller and the Revolutionary Shop Stewards and today’s still unfocused struggles against imperialist wars and capitalist exploitation."
Ingo Schmidt, Coordinator of the Labour Studies Program at Athabasca University, in: WorkingUSA: The Journal of Labor and Society, September 2015, Volume 18.3: 525-528.

"Ralf Hoffrogge is especially successfully in describing how a group of ordinary working men, who in no way began as revolutionaries but rather as trade unionists fighting to defend workers’ living standards, nonetheless built up the only network which was able to bring workers on and off the streets [...] during the revolutionary upheavals. He explores the complicated relationship between the Stewards and the various socialist political parties with great skill and discusses the emergence of a new kind of socialism amongst Müller and his colleagues, which did not focus on state power and centralisation but rather on grassroots democracy and workers’ control, sometimes known as council communism."
Dick Geary, Emeritus Professor of Modern History, University of Nottingham, UK

"The merit of Hoffrogge’s contribution is a capacity to translate his extensive research into a wide-ranging historical analysis and narrative of the role of the Revolutionary Shop Stewards and Richard Müller. [...] In addition to the great historical importance of Hoffrogge’s work, the study of the subject will also play an important role for contemporary debates about the road to socialism."
Dario Azzellini, Assistant Professor of Political Science at the University of Linz, Austria

"Ralf Hoffrogge has authored an invaluable addition to the literature of German radicalism by detailing the life of one of the key leaders of the Revolutionary Shop Stewards. Müller and his comrades provide an interesting contrast to more well known supporters of Social Democracy and Communism within the German workers’ movement."
William A. Pelz, Director of the Institute of Working Class History, Chicago, USA

1 Introduction: A Forgotten Revolutionary
The Politics of Historical Interpretation
The Makers of the German Revolution
2 Background, Youth, and Early Union Activities: 1880-1913
From Farm to Factory
Müller’s (Very) Private Life
Fighting Taylorism with its Own Weapons
Bureaucracy in the Service of Agitation
3 Opposition to the Burgfrieden: 1914-1918
‘The Great Betrayal’
From Discipline to Opposition
Early Ambiguities and their Price
4 The Revolutionary Shop Stewards and Political Mass Strikes: 1916-1918
The Stewards’ First Political Strike: Protesting Liebknecht’s Arrest
Repression and the New Opposition
Müller’s Arrest and the April Strike
Marking Time under Repression
Preparing for the January Strike: Rising Discontent and the Bolshevik Example
The January 1918 Strike: Council Power Emerges
The Politics of the Action Committee and the End of the January Strike
Barth and Däumig lead in Müller’s Absence
Müller’s Return
5 The German Revolution in Berlin, 1918
The Stewards and the Spartacists: A Tale of Two Styles
Arming the Revolution
Outbreak
Council Power
The State of the Revolution
6 Chairman of the Berlin Executive Council: 1918–1919
Conflict, Caution and Counter-revolution
Loss of National Power
7 Richard Müller and the Council Movement: 1918–1919
The Council Movement in War and Revolution
The First Council Congress and the Triumph of Parliamentarianism
The Blocked Path to Socialism
Berlin’s January Uprising
Political Murder, Demoralisation, and the End of the Revolutionary Shop Stewards
Theorising Council Socialism
The March Strikes of 1919
After the Tumult
8 From Council Movement to Works Councils: 1919-1920
Council Ideal and Works Council Reality
Leading the Left Opposition in the DMV
Defeat at Nuremberg, Compromise in Stuttgart
The Works Councils Act, Armed Conflict and Party Split
DMV Political Divisions and the Works Council Centre
The first Works Council Congress 1920
The State of the Revolution in 1920
9 From Council Socialism to Party Communism and Beyond: 1920-1924
The Leninist Model and the USPD Split
The Communist Union Centre
The Red International of Labour Unions
Crisis in the Communist Party and the March Action of 1921
Post-March Crises and `Made in Moscow´ Resolution
The Revelation Affair
Müller, the unwanted Communist
10 Richard Müller as Historian of the German Revolution: 1923-1925
Müller’s Historiographical Approach
Müller as Publisher
11 Footnotes and Suppression - Richard Müller’s Impact on Historiography
The Millstones of Social Democracy and Marxism-Leninism
Müller in East Germany
Müller in West Germany
12 Break with Politics, Withdrawal into Private Life: 1925-1943
The DIV, the ‘Construction Issue’ and Union Fragmentation
Müller as Landlord
Drifting back to Social Democracy?
Returning to Obscurity
13 Conclusion: The Darkness of History