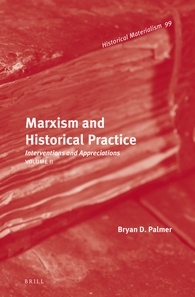 The two volumes of Marxism and Historical Practice bring together a wide range of essays written by one of the major Marxist historians of the last fifty years. Collected in Volume II, Interventions and Appreciations, are articles and reviews capturing the breadth of Palmer’s interests as a radical historian. Cultural forms and representational productions are analysed; political readings of historiography and pioneering historical practice provided. Themes as diverse as the analytic and political contributions of Eric Hobsbawm and E.P. Thompson, the conflicted legacies of American Trotskyism, and the representation of class politics in Scorsese’s Gangs of New York are covered.

Bryan D. Palmer, Ph.D. (1977), SUNY-Binghamton, is Canada Research Chair in the Department of Canadian Studies, Trent University. His prize-winning monographs, edited collections, and articles on the history of labour and the left, and historiography and theory, have been translated and published in Greek, Korean, Spanish, Portuguese, Italian, and other languages. Among his many books are James P. Cannon and the Origins of the American Revolutionary Left, 1890-1928 (UI Press, 2007) and the Brill-published Revolutionary Teamsters: The Minneapolis Truckers’ Strikes of 1934 (2013).

All interested in Marxist history and theory; social and labour history; history of the revolutionary left; class formation and class struggle; and history of Canada, the United States, the United Kingdom.

PART II: REEL HISTORY: COMMENT ON THE CINEMATIC
4. Night in the Capitalist, Cold War City: Noir and the Cultural Politics of Darkness
5. The Hands that Built America: A Class-Politics Appreciation of Martin Scorsese’s Gangs of New York
6. Sugar Man’s Sweet Kiss: The Artist Formerly, and Now Again, Known as Rodriguez

PART III: HISTORIOGRAPHY: THE REVOLUTIONARY LEFT
7. Rethinking the Historiography of United States Communism: Questioning American Radicalism
8. Before Braverman: Harry Frankel and the American Workers’ Movement
9. The Personal, the Political, and Permanent Revolution: Ernest Mandel and the Conflicted Legacies of Trotskyism