Dr. Kevin Murphy teaches Russian history at the University of Massachusetts Boston. His book Revolution and Counterrevolution won the 2005 Isaac and Tamara Deutscher Memorial Prize. His current research is on the Petrograd Soviet of 1917.

Academia has never been very kind to Leon Trotsky. As part of its mandate to demonize the entire revolution, the totalitarian school from its inception portrayed Lenin and Trotsky as no better than Stalin. What currently passes as ‘scholarship’ suggests that recent standards still are not very high. Geoffrey Swain asserts that Trotsky, who was surely the foremost contemporary authority on the rise of fascism, ‘had absolutely no understanding of European politics’.[1] At the launch of his Trotsky biography in London, Robert Service declared: “There’s life in the old boy Trotsky yet—but if the ice pick didn’t quite do its job killing him off, I hope I’ve managed it.” Similarly, in his biography of Stalin, Stephen Kotkin laments that “the Bolshevik putsch could have been prevented by a pair of bullets” aimed at Lenin and Trotsky. To cut Trotsky down to size, Kotkin claims that Stalin not only outwitted Trotsky but supposedly found his “calling” as a “people person” in the party apparatus.[2]

Thomas Twiss goes against this anti-Trotsky current in his study of Trotsky and the Problem of Soviet Bureaucracy. This a thoughtful and meticulous work on many levels. Twiss aims “to explain the development of Trotsky’s thinking on the problem of Soviet bureaucracy.” While focusing on the Soviet bureaucracy, Twiss does not isolate it from the political economy of the Stalinist system. This is perhaps the most systematic work yet on Trotsky’s frequently changing and dynamic analysis. And while clearly sympathetic to Trotsky, Twiss often takes issue with his positions and avoids indulging in the latest Russian studies fad of acting as an inept lawyer for his subject.

Much of Twiss’s analysis is based on a skillful integration of what is now known about various aspects of the Stalinist system. He repeatedly criticizes Trotsky for accepting the veracity of Stalinist propaganda, such as the Shakhty show trial of engineers in 1928 and Menshevik show trial in 1931. While Trotsky provided insights into the Moscow show trials in 1936, Twiss comments that there is no evidence that  “the supporters of repression” viewed the prospect of capitalist restoration more positively than “its victims.” He also challenges Trotsky’s absurd claim that the trials were a response by the bureaucracy to the success of the Fourth International. Indeed, Twiss repeatedly takes Trotsky to task for his exaggerated claims of the strength of the opposition that supposedly pressured the regime into the “Left” course of industrialization and still claimed thousands of supporters as late as 1936.

Twiss’s most important criticisms of Trotsky’s analysis are on Stalin’s forced collectivization and kulaks (supposedly wealthier peasants). He notes that Trotsky accepted Stalinist propaganda about a “kulak strike” in 1928 and that frequently authorities “applied the label of ‘kulak’ or ‘ideological kulak’ to middle or even poor peasants who resisted collectivization.” Significantly, Twiss emphasizes the crucial mistake he made in his support of collectivization, that “Trotsky essentially accepted the leadership’s characterization of the collectivization as a spontaneous movement by the peasantry.” Only in 1935 did Trotsky acknowledge that the “frightened muzhiks” were driven into the collective farms “by the knout” and only in 1939, though not mentioned by Twiss, did Trotsky begin to come to terms with the results of the catastrophic human cost for collectivization in the Ukraine.

In fact, all of Trotsky’s arguments about collectivization and supposed ‘kulaks’ have now been thoroughly refuted by overwhelming archival evidence. Even before the archives opened, Moshe Lewin showed that ‘kulak’ was a propaganda rather than economic term, often applied to middle and even poor peasants, which meant collectivization entailed violent reprisals “against whole sectors of the broad mass of the peasantry.” As the head of the Russian Socialist Federation argued, “if we have no kulaks, we shall have to acquire some by nomination.”[3] A systematic study of OGPU reports to Stalin shows that in early 1924 the secret police were still sympathetic to the plight of the peasantry but the increasingly hostile reports, especially under Yagoda, show that they had lost faith in their own propaganda, that the term “kulaks” became interchangeable with peasants.[4] Village meetings often nominated widows, old people or even drew lots in order to meet absurd OGPU ‘dekulakization’ quotas. Massive resistance to collectivization, particularly by women, often involved entire villages. Even skewed Soviet statistics that attempted to scapegoat ‘kulaks’, acknowledged that the majority of the 2.5 million peasants involved in 13,754 rebellions in 1930 alone were either middle or poor peasants.[5] So overwhelming is the data that standard texts on the history of the Soviet Union now refer to collectivization as Stalin’s “war on the peasants.” The total death toll of this war, including collectivization, dekulakization, famine, and peasants who died either in transit to or in the Gulags is well over six million, including half of the 700,000 political prisoners executed in 1937-8[6]

Although Twiss appears to recognize all this, he fails to draw the only logical conclusion. This is hardly an obscure issue about a minor aspect of Stalinism. Despite his later reservations and revisions, Trotsky’s position at the time of collectivization placed him on the wrong side of the most violent peasant rebellion of the Twentieth Century.

The most fascinating and provocative sections of this study are those detailing Trotsky’s changing definition of the Soviet bureaucracy as a Bonapartist regime. In State and Revolution, Lenin summarised the role of state as an instrument for the exploitation of the oppressed class but he also cited Engels on the “exception”, when “periods occur in which the warring classes balance each other so nearly that the state power as ostensible mediator acquires, for the moment, a certain degree of independence of both.” Such was the case of Bonapartism of the First and Second Empires, Bismarck in Germany and, adds Lenin, Kerensky in 1917. As early as 1928, Trotsky started describing the regime within this theoretical framework, as “Kerenskyism in reverse.” This model clearly framed much of his thinking on Stalinism as Trotsky would reference Soviet Bonapartism in over a hundred articles and interviews over the next dozen years.

Throughout the early 1930s Trotsky repeatedly used the Bonapartist state paradigm in general terms, though, as Twiss describes, sometimes inconsistently, favouring the term “bureaucratic centrism” or referring to Bonapartism in the future tense as a potential force for the restoration of capitalism.  By early 1935 he moved to a more precise definition specifically comparing the regime to the First Empire, arguing the the political conquest of Thermidor had occurred a decade earlier with the defeat of the 1924 Opposition. Yet, just as Napoleon did not  “reestablish the economy of feudalism” argued Trotsky, “the social content of the dictatorship of the bureaucracy is determined by those productive relations that were created by the proletarian revolution.”

Although he references Hal Draper’s masterful discussion on Marx and Engels writings on Bonapartism, Twiss fails to provide a precise definition to assess Trotsky’s analysis. Citing Marx and Engels at length, Draper shows that the state moves towards temporary autonomization during periods of crisis because of a class “statemate”, an “unresolved class struggle balances the power of contending classes against each other.” Comparing Bonapartism to a plaster cast, that emerges because “there is no other alternative to prevent society from shaking itself apart in internecine conflict without issue.” Bonapartism provides the conditions for the necessary “modernization of society” when no existing class is “capable of carrying out this imperative under its own political power.” Yet this transitory arrangement bore the “seeds of its own dissolution”, as modernization meant that the maturing bourgeoisie would begin to recognize its own power and the Bonapartist state “would begin to outlive the value of its services.”[7]

Attempting to apply Trotsky’s analysis to this model poses many problems. While he acknowledges Trotsky’s uncritical acceptance of much of the regime’s self-serving ‘kulak’ propaganda, Twiss underestimates the crucial role  that this phantom counter revolutionary class played in Trotsky’s analysis of Soviet Bonapartism. Trotsky’s fixation and hundreds of references to ‘kulaks’ are inexplicable outside the context the Bonapartist paradigm. As he wrote in April 1929:

“The problem of Thermidor and Bonapartism is at bottom the problem of the kulak. Those who shy away from this problem, those who minimize its importance and distract attention to questions of party regime, to bureaucratism, to unfair polemical methods, and other superficial manifestations and expressions of the pressure of kulak elements upon the dictatorship of the proletariat resemble a physician who chases after symptoms while ignoring functional and organic disturbance.”

Additionally,  Twiss cites Alec Nove’s economic study of the Soviet Union that shows that the First Five-Year Plan resulted in the "mass misery and hunger" of 1933 which was the “culmination of the most precipitous peacetime decline in living standards know in recorded history." Yet Twiss persists in describing this state offensive as a “Left” turn though he never explains why. For Trotsky, the assumption was that the working class benefited from industrialization and was the polar class versus kulaks that Stalinism wavered between. Yet in the factories, Stalinism had converted trade unions into productivity organs, largely silenced dissent, utilised food rations as a means of disciplining the workers and arrested thousands of oppositionists. Rather than providing temporary stability to keep contending classes from ripping Soviet society apart, Stalinism was a brutal, chaotic force pummelling Soviet peasants and workers in an attempt to force both to pay for rapid industrialisation.

Trotsky’s search for contending classes to fit his Bonapartist model would prove to be elusive. In October 1932, almost three years after Stalin initiated “dekulakization” and a month after the first report of the Ukrainian famine appeared in his Biulleten’ Oppozitsii, Trotsky continued to warn the regime about the “kulak danger.” His 1935 refined definition of Bonapartism was driven in part, as Twiss shows, by the regime’s concessions to pauperized peasants on the collective farms. Here Trotsky’s contending class by his own admission did not even exist yet, the very nature of agricultural production would inevitably form this reactionary force at some point in the future. By the late 1930s Trotsky largely dropped the kulak rhetoric and viewed imperialism and a section of the bureaucracy as the right restorationist forces of counterrevolution.

Twiss contends that by 1936 Trotsky believed the bureaucracy had moved away from “relative autonomy” towards “extreme autonomy” and, claims Twiss, that this “suggested a class-like degree of autonomy.” Yet such a transformation to complete autonomy would have negated Bonapartism and represented a class, not a “class-like” formation. Moreover, throughout the 1930s Trotsky asserted dozens of times that the collapse of the Stalinist system was imminent, a prognosis inextricably linked to his Bonapartist model--even if his epigones later ignored it. To be sure, Trotsky never claimed to have redefined the Marxist theory of the state as Twiss implies. Either the bureaucracy was a temporary phenomenon wavering between contending classes or it represented the interests of a particular class, even if that class was the bureaucracy itself. This was the position Trotsky himself was moving toward despite Twiss’s claim that a snapshot from 1936 was his final, frozen verdict. Twiss fails to answer the obvious question. Once contending classes and the temporary nature of Stalinist Bonapartism are jettisoned in favor the “extreme autonomy” of the bureaucracy, what exactly is left of Trotsky’s Bonapartist model?

Overwhelming archival evidence has now demolished the Stalinist myths about the regime’s brutal war on the Soviet peasantry. Marxists who had previously attempted to hold onto the remnants of Trotsky’s analysis are now faced with the conundrum of either choosing to repeat what we now know was Stalinist propaganda or alternatively coming to terms with serious defects in Trotsky’s Bonapartist analysis. Whatever shortcomings in this study, Tom Twiss deserves credit for initiating a more historically accurate and non-sectarian discussion on the nature of the Stalinist system.

4.Hugh Hudson, The Kulakization of the Peasantry: The OGPU and the End of Faith in Peasant Reconciliation, 1924-27. Jahrbücher für Geschichte Osteuropas, vol 1, 2012. 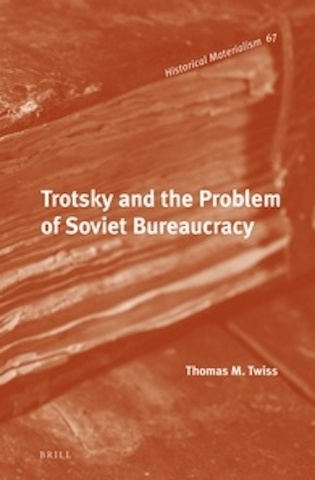