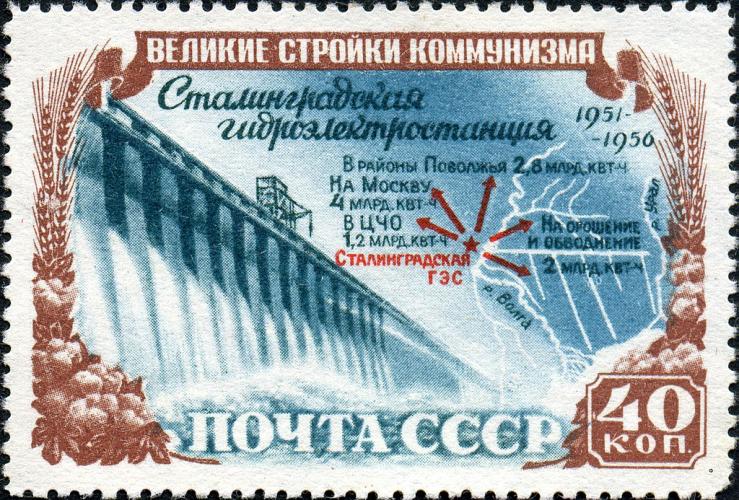 A century ago, in April 1921, Lenin received a letter from Petr Alekseevich Kozmin, an old Social Democrat and agricultural engineer specialising on the grain economy. At the latest party congress, which had just ended a few weeks before, there had been a conversation about the possibility of using the wind power of existing windmills for the electrification of the countryside. Gleb Krzhizhanovskii, head of Russia’s electrification commission, had proposed that Kozmin should investigate the matter, as he had access to the necessary information on mills in his capacity as head of the chief grain administration (glavmuka). Kozmin’s follow-up letter––printed with Lenin’s remarks in ‘Leninskii Sbornik’ in 1932, a source recently rediscovered in the context of the October Ecologies project1––reveals a stunning planetary perspective of Russian engineers and a largely forgotten history of renewable energies in the Soviet Union.

In his letter, Kozmin made a proposal that went far beyond the original idea of rural electrification: he argued that an autonomous commission on wind power should be formed where theoretical physicists, experts on aero-dynamics, and engineers would work together on the issue. Such a commission, he claimed, could in only ten years produce more wind than fossil-fueled power and “command five times as much energy than GOELRO.” In what seems like a sudden leap, Kozmin then closes his letter with the assertion that such a commission would constitute “a first step to the organisation of a glavsolnca––a chief administration of the sun.”2

Glavki were the chief committees of the war economy. In a sense, it was no big deal to propose a new one––whatever material needed to be produced, supplied, and distributed could justify central administration. By 1920, when the war economy was coming to an end, there were around 50 glavki, each responsible for a certain economic sector within the Supreme Economic Council:3 there was Kozmin’s glavmuka, glavelektro for the electricity sector, glavneft for procuring oil, and so on. But Kozmin’s proposal broke with the established forms of economic organisation and gave the glavy a new meaning. Glavy managed scarce resources in a war-torn economy, but there was no shortage of the sun––even less so one a glavsolnca could possibly manage. Unlike grain and oil, the sun was more a natural condition of the war economy than a thing-like resource in it. Lenin was struck by the term as well, circling it with thick lines and adding a sceptical-interested ‘hm!??’ at the margin. Komzin’s idea of a glavsolnca pointed far beyond the management of scarce resources towards the making of a future base of abundance for the Soviet state: solar radiation.

Little is known about Petr Kozmin’s work and life, so there is room for speculation what exactly he had in mind when he proposed a main administration of the sun. As an expert in flour milling, he worked with grain, a product of photosynthesis, but there is no evidence that Kozmin associated agriculture with the solar economy. Not his grain commission, but the commission on wind power pioneered a glavsolnca by tapping into the air’s motion triggered by solar radiation. Rather than a broad biospheric perspective, he seems to have shared the view of geophysicists, who focused on the sun as a source of energy and work. It was not uncommon among Soviet physicists of that time to conceive of the energy economy as harnessing solar radiation in its different forms and transformations. It is therefore possible that Kozmin had in mind a central administration of what we would today call renewable energy, the use of the infrared and visible wavelengths of solar radiation.

Energy historians commonly associate the first half of the twentieth century with an intensification of fossil fuel use through a transition to the more versatile forms of energy, oil and electricity.4 In the early Soviet Union, however, the two did not merge easily into the same kind of modernity. While electricity was widely understood as progressive, oil was not generally seen as an energy of the future. The electrification plan treated oil as a transitory fuel and argued against combustion engines for their ‘centrifugal’ and ‘decentralising’ tendencies.5 Well-known physicists, such as Nikolai Semenov, Abram Ioffe, and Boris Veinberg, thought it reasonable to prepare for a post-fossil future and develop technologies for a more direct use of the sun’s energy.6 Research on renewable energies was necessary, argued Semenov, as “[s]ocialism is not built to last for only a century,” the period over which fossil resources were expected to last.7

Soviet historiography was no less ignorant about this future past than today’s energy historians. While the Marx-Engels-Lenin Institute found Kozmin’s letter worthwhile publishing in 1932, later Soviet historians ridiculed his proposal, denouncing him as an insane ‘superrevolutionary’ who had lost contact with the concrete work of planning.8 Yet this interpretation conceals that Lenin’s reaction was far from dismissive and that research on wind power indeed intensified over the 1930s. Passing the letter on to Gleb Krzhizhanovskii, head of GOELRO and Gosplan, Lenin asked: “A special commission? Do we need that? I remember reading on the impressive progress of wind turbines before the war and that they have achieved impressive success. Shouldn’t one of our experts do a more detailed inquiry: order the (particularly German) literature and study it in Gosplan?”9 Krzhizhanovskii’s reply is unknown, but it is unlikely that he found the idea entirely outlandish. While he saw renewables as an energy for the fringes of the Soviet economy––the backward agriculture of the imperial periphery––he supported research on the matter (his Institute of Energetics later even set up a solar power laboratory).

For a short time, the Soviet Union was leading wind power technology in the 1930s.10 While the concrete chain of events and the role of Kozmin’s letter have yet to be established, a wind power commission was indeed formed. The Central Aero-Hydrodynamic Institute (ZAGI), which had studied wind turbines since 1918, set up a wind power laboratory in the mid-1920s. Supported by the head of the Supreme Economic Council, the Georgian Bolshevik Sergo Ordzhonikidze, the laboratory designed and constructed various wind power plants with a capacity of up to 100 kW over the 1930s.11 True to the Soviet commitment to electrification, the ZAGI engineers developed the first utility-scale wind generator and the earliest system integrating wind and thermal power. Contrary to Kozmin’s hopes, however, neither the commission, nor the successes in wind power technology, gave way to a glavsolnca and a deeper institutionalization of renewable energy. By World War II, the Soviet Union had embarked on an oil-based energy path.12 The urgency to secure current energy supply may have eclipsed a planetary perspective, which drew a future into the present that was looming a century ahead.