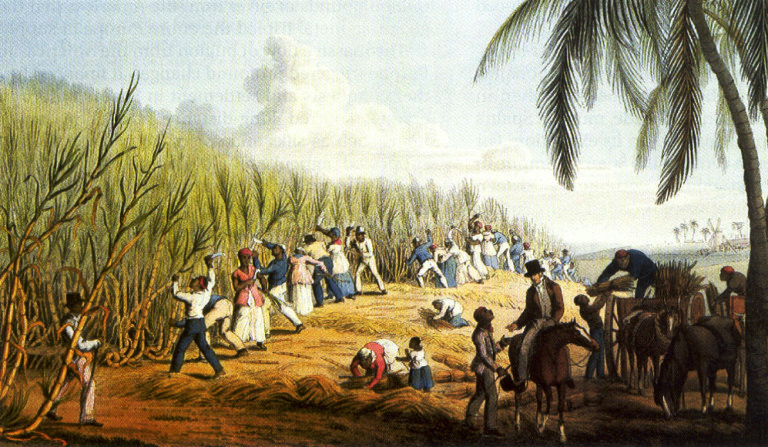 In 1944, the Caribbean anti-colonial thinker Eric Williams wrote his classical work Capitalism and Slavery. The book argued that the enormous wealth that Britain pumped out of the slave-plantations in the West-Indies in the eighteenth century contributed significantly to the Industrial Revolution, and thereby to the birth of modern capitalism. For 75 years now, historians have debated the merits of the “Williams’ Thesis”. But in this discussion, the Netherlands and its colonial empire have been largely ignored. Often quite conservative imperial historians in the Netherlands saw the question of slavery’s contribution to capitalism as irrelevant because the Netherlands was so much later than Britain in going through its industrial revolution. This argument conveniently ignored the great importance of Dutch commercial capital to the wider breakthrough of European capitalism. In general, these historians usually argued that the contribution of slavery in the Dutch West Indies was small. They also tended to treat the history of colonisation, violence and slavery in the Americas as completely separate from the history of Dutch colonialism in Asia, as if the two had nothing to do with each other. However, on all three counts, the narrative is now shifting, even among historians working in the Netherlands. This can help to provide a basis for rewriting the history of the global involvement of the Dutch empire in slavery, that brings together the Atlantic and Indian Ocean world and that shows how the wealth amassed in both hemispheres fed into European capital accumulation, with Dutch capital in the role of initiator, enforcer, organiser, and intermediary.

Dutch merchants were involved in global slavery from the sixteenth century onwards. They remained so until the first half of the 1860s, when the Dutch were the last European nation to formally abolish slavery in its colonies. Even then, the Dutch stipulated further forced labour from their formerly enslaved subjects. In the East Indies, this was organised in the form of the “cultivation system”, which had already replaced slavery by other types of coerced labour in the preceding period. In Suriname and other Dutch Caribbean colonies, the emancipation decree of 1863 demanded another ten years of “apprenticeship” on the plantations, in which the African population was obligated to keep on working for their former masters. The role of the Dutch Empire in global slavery was extensive, including the transportation and sale of hundreds of thousands of captives in both the Atlantic and the Indian Ocean region, and the operation of slave labour in colonies that at various points of time included Northern Brazil, New Amsterdam (now New York), Suriname, South Africa, today’s Indonesia, Sri Lanka, and many other parts of Asia. The first large-scale “experiment” with plantation slavery by the Dutch did not take place in the West, but on the nutmeg-producing Banda Islands in the Southern Moluccas, after VOC-governor Jan Pieterszoon Coen organized a genocidal campaign against the indigenous population. In most areas under VOC-control, however, the Dutch combined slavery with many other forms of forced labour. This was different in Atlantic colonies such as Suriname, that became organised completely around the institution of  largely African plantation slavery and in which other forms of coerced labour like white indentured labour or forms of enslavement of the indigenous population were pushed to the margins.

As for Britain and France, the largest surge of this “classical” form of commercial slavery that was central to Eric Williams’ argument in the Dutch Empire took place in the course of the eighteenth century, when Atlantic circuits of commerce and finance exploded on a massive scale. And, as Williams himself suggested many decades ago, the main revenues were not drawn from the slave-trade per se, but from the goods produced on the plantations by the back-breaking labour of the enslaved: sugar, coffee, tobacco, indigo, cacao and other products for European markets. My colleague Ulbe Bosma and have publishd a long article in the main Dutch journal for social and economic history that challenges the notion that the Dutch only drew marginal economic benefits from this eighteenth-century plantation slavery in the Atlantic world. The article sums up the results of the work of a team of researchers that for the past five years looked into the importance of slavery in the West-Indies for the Dutch economy. Taking as our starting point the year 1770, which was an average year for the second half of the eighteenth century, we show that 5.2 percent of the Dutch GDP was based directly on plantation slavery. That figure alone already shows that we are talking about a sizeable sector. Recently, a study executed by US economists working for the federal government concluded that the weight of the entire “digital economy” – Silicon valley, e-commerce, the digital infrastructure up to and including the cable companies – is around 6.5 percent of the US GDP today. However, a mere percentage of GDP only gives us one part of the story of the economic weight of slavery. It is also important to know where in the economy the revenues drawn from slavery landed up. In the case of the Netherlands, this was largely in the massive commercial sector located in the western part of the country, the Netherland’s richest province Holland. There, according to our calculation, by 1770 a massive 10.36 percent of GDP was based on Atlantic slavery. That this percentage was so high was a direct result of the importance of slave-produced goods in the Dutch trading sector, which still dominated the economy at the time. Of all goods that went through Dutch harbours, expressed in value, 19 percent was produced directly by slaves. Another 4 to 5 percent were goods to provision the plantations and the slave-ships.

Dutch capital profited not only from the exploitation of the slave-colonies controlled by the Dutch colonial companies and the state. From the time of the Dutch Revolt in the late sixteenth century onwards, Amsterdam had functioned as a crucial hub of wider European trade and finance. In the seventeenth century this distributing role had prominently included the trade in colonial goods, but in absolute terms European bulk carrying trade dominated the circuits of capital investment. This gradually changed in the eighteenth century, when the Dutch were outcompeted in other areas, but were able to compensate for this by the increasing weight of the trade in colonial goods from both the Atlantic and the Indian Ocean region. By the second half of the eighteenth century, the Dutch not only imported coffee and sugar from Suriname, but also handled millions of pounds of coffee and sugar produced on France’s main plantation colony St. Domingue. This relationship between the Dutch economy and St. Domingue persisted, until a revolution by the enslaved in 1791 led to emancipation and the forming of independent Haiti. Meanwhile, a tight network of bankers, merchants, mortgagers and financiers tied the still thriving Amsterdam financial market to planters in the Spanish colonies, the small Danish Caribbean colonies, and the US South.

These arguments for the Dutch Atlantic economy show that the question of the relationship between capitalism and slavery posed by Eric Williams should be approached in a much broader framework than just the connections between the British Industrial Revolution and Britain’s sugar complex in the West Indies. It also challenges the idea of some Dutch historians, that Atlantic slavery was only of marginal importance to the Dutch economy. But much more than that can be done, if the history of slavery is truly approached on a global scale. This does not necessarily mean a simple copying of the methods used to calculate the economic significance of Atlantic slavery and applying it to the VOC Empire. While, in the Atlantic world, plantation slavery became the point towards which all commercial activities gravitated, in Asia the colonial empires mostly combined many different forms of coerced labour at the same time, so that it becomes hard to estimate what constitutes profits from slavery per se. Also, by and large, plantations in the Atlantic world were owned directly by Europeans, while in Asia the VOC often relied on intermediaries such as kings, landed aristocracies, or Chinese merchants and tenant farmers. Perhaps more important at this stage than overcoming these difficulties for making precisely comparable calculations, however, is to face the challenge of bringing the underlying histories of colonial slavery into a common framework. The connections between slavery in the Atlantic and the Indian Ocean World did not end with the Dutch experiences with plantation slavery on the Banda Islands, that were carried over by VOC and WIC personnel across the oceans to the Atlantic world. They continued up to the era of the formal abolition of slavery, when Johannes van den Bosch oversaw the ‘modernisation’ of plantation slavery in Suriname before he became the organiser of the cultivation system on Java, and when indentured labourers from India and Indonesia were transported to Suriname to build the new coerced labour force after the 1863 Emancipation decree. Rewriting the history of Dutch colonial slavery in such a connected way would be greatly strengthened by cooperation between researchers working on these topics in Indonesia, the Caribbean, and the Netherlands. In the Netherlands itself, historians are gradually starting to come to terms with this more global story of slavery’s importance for Dutch capitalism. At long last.