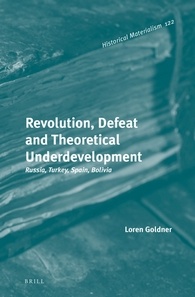 The historical studies presented here examine four ideologies— Leninism, Trotskyism, anarchism, and anti-imperialism— still with us, however different and diffuse in form. They are a contribution to the worldwide Marx renaissance of recent decades which has helped clear away the legacies of the Second, Third and Fourth Internationals, not to mention of the ‘real existing socialism’ of the Soviet Union and its bastard progeny.

These revolutionary predecessors did not fail because ‘they had the wrong ideas’; in contrast to today, they were merely embedded in an earlier dynamic where capitalism, globally, was not yet fully dominant. The cases of Russia, Turkey, Spain and Bolivia allow us to measure the distance between their epoch and our own, and to clear away their problematic legacies.

Loren Goldner is a writer-activist who co-edits Insurgent Notes. He has published numerous articles and several books, including Ubu Saved From Drowning: Worker Insurgency and Statist Containment in Portugal and Spain, 1974-1977 (2000), Vanguard of Retrogression: Postmodern Fictions as Ideology in the Era of Fictitious Capital (2001), and Herman Melville: Between Charlemagne and the Antemosaic Cosmic Man. Race, Class and the Crisis of Bourgeois Ideology in an American Renaissance Writer (2006), all with Queequeg Publications.

Scholars and activists with a commitment to learning about twentieth-century revolutions, the influence of nationalism on revolutionary workers' movements, the relationship of theory to historical practice, capitalist development and class formation.

1 The Agrarian Question in the Russian Revolution: From Material Community to Productivism, and Back

2 ‘Socialism in One Country’ Before Stalin, and the Origins of Reactionary ‘Anti-Imperialism’: The Case of Turkey, 1917–25

3 The Spanish Revolution, Past and Future: Grandeur and Poverty of Anarchism: How the Working Class Takes Over (or Doesn’t), Then and Now

4 Anti-Capitalism or Anti-Imperialism? Interwar Authoritarian and Fascist Sources of a Reactionary Ideology: The Case of the Bolivian MNR