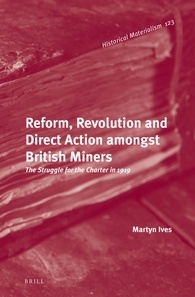 The Struggle for the Charter in 1919

In Reform, Revolution and Direct Action amongst British Miners, Martyn Ives offers a new perspective on one of the most volatile periods in labour history. His research into the astonishing coalfield militancy of 1919 reveals it was a watershed year on a par with 1926. Indeed the General Strike was in many ways merely its dim echo.

Whilst historians have skated over the labour unrest of 1919, Martyn Ives uncovers a remarkable incidence of unofficial mass strikes in the coalfields, waged against mine-owners, government and trade union leaders alike. Led by revolutionaries, and infused with political radicalism, this mass movement offered a glimpse of an alternative road to socialism, based upon the organised industrial power of the working class.

Martyn Ives, Ph.D (Econ) in the Department of Government, Manchester University (1994). He currently works in television, where he is an Emmy Award winning writer and producer.

All interested in British labour history, and anyone concerned with the role of socialists, revolutionaries and trade union leaders in industrial mass movements.

Preface and Acknowledgements
List of Abbreviations
Introduction (with Paul Blackledge)

1. Political Alternatives in the Labour Movement in 1919
2. The Miners’ Federation of Great Britain: Bureaucratic Reformists, Militant Miners and the Development of the Miners’ Charter
3. Fife and Lanarkshire
4. Nottinghamshire
5. South Wales
6. Selling Sankey

Introduction: A Background Sketch of the Summer’s Crisis
7. Perspectives on Nationalisation in the Period of Manoeuvre
8. A Second Wave of Unrest
9. Yorkshire
10. The Demise of Direct Action and the Triumph of Electoralism