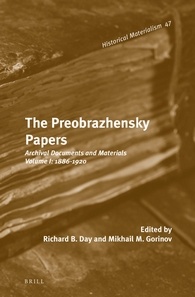 Historians generally recognise E.A. Preobrazhensky as the most famous Soviet economist of the 1920s. English-language readers know him best as author of The New Economics and co-author (with N.I. Bukharin ) of The ABC of Communism. The documents in this volume, many newly discovered and almost all translated into English for the first time, reveal a Preobrazhensky previously unknown, whose interests ranged far beyond economics to include not only party debates and issues affecting the lives of workers and peasants, but also philosophy, world events, and Russian history, culture and politics. Including moments of triumph and tragedy, they tell an intimate story of political awakening and of commitment to socialist revolution as the path to human dignity.

Richard B. Day, Ph.D. (1970), University of London, is Professor of Political Economy at the University of Toronto, Canada. He has published extensively on Soviet economic and political history, including Leon Trotsky and the Politics of Economic Isolation (Cambridge, 1973), a translation of Preobrazhensky's The Decline of Capitalism (M.E. Sharpe, 1985) and (with Daniel Gaido) Witnesses to Permanent Revolution (Brill, 2009).

Mikhail M. Gorinov, Ph.(D) History, First Deputy Head of the Main Archive Department of the City of Moscow, Russia. He is a specialist in Soviet History and has published on the political, economic and cultural life of Soviet society in the first half of the 20th century. His works on these topics are collected in the book On Moscow and Russia: Key Problems of the Homeland's History in the 20th Century (2008).

All interested in the history of the Bolshevik party in the years prior to the Russian Revolution.

Preface by Richard B. Day

Part III: The ABC of Communism

[For a more detailed overview of the Contents please see: the attached PDF.]