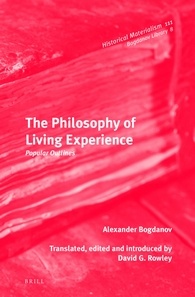 The Philosophy of Living Experience is the single best introduction to the thought of Alexander Bogdanov (1873–1928), a Russian polymath who was co-founder, with Lenin, of the Bolshevik Party. His landmark achievements are Empiriomonism (1904–6), a philosophy of radical empiricism that he developed to replace what he considered to be the crude materialism of contemporary Marxists, and Tektology: Universal Organisational Science (1912–17), a precursor of cybernetics and systems theory. The Philosophy of Living Experience (1913) was written at a transitional point between the two; it is a final summing up of empiriomonism, an illustration of his theory of the social genesis of ideas, and an anticipation of Tektology.

David G. Rowley, Ph.D. (1982), University of Michigan, is Emeritus Professor of History at the University of Wisconsin – Platteville. His publications include Millenarian Bolshevism (Garland, 1986) and "Bogdanov and Lenin: Epistemology and Revolution" in Studies in East European Thought, Vol. 48:1:1-19 (1996).

Introduction
A. What is philosophy? Who needs it and why?
B. What came before philosophy?
C. How did philosophy and science become distinguished from religion?

Chapter I. What is Materialism?

Conclusion: The Science of the Future

Appendix: From Religious to Scientific Monism