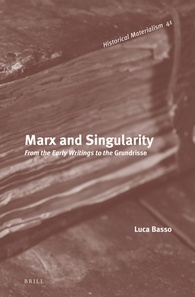 From the Early Writings to the Grundrisse

Luca Basso, University of Padua. Translated from the Italian by Arianna Bove

Marx and Singularity by Luca Basso attempts to understand the development of Marx’s thought, from the early writings to the Grundrisse, as a search for individual realisation. Drawing upon the concept of singularity in contemporary French theory, and problematising its relation to Marx’s vocabulary, this book challenges organicist interpretations of Marx’s early work. The productivity of the notion of singularity is argued to be based on the fact that it allows us to highlight the element of individual realisation, stressing at the same time its distance from the modern conception of individuality. The “correlate” of singularity is the reciprocity, moving and unstable, between the “individual” and the “collective”, which occurs in class struggles.

Updated and revised edition of Socialità e isolamento: la singolarità in Marx published by Carocci in 2008.

Luca Basso, Ph.D. University of Pisa, studied in Padua and in Berlin. He is Researcher of Political Philosophy at the University of Padua. He has published many articles and three monographs: Individuo e comunità nella filosofia politica di Leibniz (Rubbettino, 2005), Socialità e isolamento: la singolarità in Marx (Carocci, 2008) of which the current book is a revised edition, and Agire in comune. Antropologia e politica nell’ultimo Marx (Ombre Corte, 2012).

All interested in Marx’ thought, in history of Marxism and of political movements, and anyone concerned with the contemporary political theory, sociology and anthropology in relation to concepts of the individual, society and community.

[...] both works [including Basso's "Marx and Singularity] are exciting and outstanding achievements in academic Marxism, and we should applaud the editors of the Historical Materialism Book Series for making this work available to an English language readership.
Christian Lotz, Marx & Philosophy, 9 May 2014

1. The question of individuality
1.1. Individuals, determination and contingency
1.2. Gattungswesen and politics: from the Critique of Hegel’s Doctrine of the State to The Holy Family
1.3. The individual separation between bourgeois and citoyen
1.4. A society without relations
1.5. The need for a change of perspective: The German Ideology

2. Beyond the ‘private – social’ dichotomy
2.1. Social power and randomness in The German Ideology
2.2. The ambivalence of the community
2.3. Singularity and practice: the realisation of ‘individuals as such’.
2.4. Common class-action
2.5. Towards 1848: thinking in the conjuncture

3. Social Nexus and Indifference
3.1. The genesis of individuality and capitalism in the Grundrisse: the breakthrough of the critique of political economy
3.2. Gemeinwesen in precapitalist social formations
3.3. Society as an ensemble not of individuals, but of relations
3.4. The subject between universality and emptiness
3.5. Isolation: a sentence or a potentiality