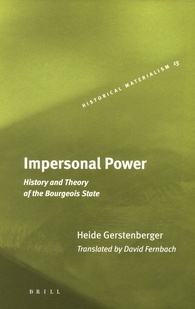 History and Theory of the Bourgeois State

The point of departure of Heide Gerstenberger’s path-breaking work is a critique of structural-functionalist theory of the state, in both its modernisation theory and materialist variants. Prof. Gerstenberger opposes to these a historical-theoretical explanation that proceeds from the long-term structuring effect of concrete social practice. This is elucidated by detailed investigation of the development of bourgeois state power in the two key examples of England and France. The different complexions that the bourgeois state assumed are presented as the results of processes of social and cultural formation, and thus irreducible to a simple function of capitalism. This approach culminates in the thesis that the bourgeois form of capitalist state power arose only where capitalist societies developed out of already rationalised structures of the Ancien Régime type.

Heide Gerstenberger, Prof. Dr., has taught 'Theory of state and society' at the University of Bremen from 1974 to 2005. She has published extensively on state theory, social analysis as well as on the history and the present conditions of seafaring.

All those interested in the explanation of long-term historical developments, in state theory, as well as in the political, economic, and religious history of England and France.

Part One - The Rise of Bourgeois States: Preconditions for an Explanation

‘How then did they do it?’
Chapter 1. English Feudalism: Appropriation by Land Lordship and Force of Arms under Feudally Generalised Royal Power
1.a. Preconditions of feudal rule
1.b. Establishment of feudal power structures

Chapter 3. The Estate Constitution of Public Power
3.a. Dissolution of the personal power of the English monarchs
3.b. Objectification of local generalised power
3.c. The ‘Establishment’: transformation of church rule

Chapter 4. The Revolutionising of the Forms of Rule of the Ancien Régime into Bourgeois State Power
4.a. Opening up of centralised power of office
4.b. Separation of local power of office from the privileges of the landed nobility
4.c. Dissolution of the ancien régime of appropriation
4.d. From the ‘political nation’ to a national political public
4.e. ‘Pomp and circumstance’: the English form of bourgeois state power

Chapter 1. The Development of ‘Feudal’ Power Relations
1. a. The rule of the aristocracy
1.b. Hierarchy and immunity

Chapter 4. The French Revolution as Event and Structural Change
4.a. The rise of a revolutionary public
4.b. The struggle for a new order
4.c. The revolutionising of ancien-régime forms of rule into bourgeois state power
4.d. Emperor, king and notables: the French constitution of the bourgeois state