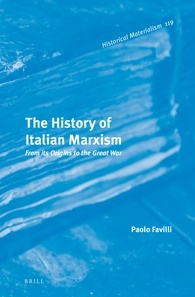 From its Origins to the Great War

In The History of Italian Marxism, Paolo Favilli offers an articulated analysis of the different levels at which Marx's ideas - and 'Marxism' as a doctrinal 'system' - were received in Italy from the time of the First International up till the eve of the First World War.
Rejecting any linear understanding of the relation between Marx's texts and the assumption of Marxism as the ideology of the burgeoning workers' movement, Favilli explores the growth of different forms of Marxist culture through the period of the Paris Commune, the late-nineteenth-century debate on 'revisionism', and the rise of revolutionary syndicalism.
Asking in each case whether 'Marxism' meant a science, an ideology, a way of doing politics, a utopia, a myth or a religion, Favilli goes on to assess which of these 'Marxisms' died with, and which have survived, the 'crisis' at the end of the twentieth century.
With a new preface to the English edition.

Paolo Favilli was a professor of Contemporary History and Head of Humanities Department at Genoa University. He is a scholar of the History of Cultures of Socialism. His studies on the history of Marxism include Il Socialismo italiano e la teoria economica di Marx (Bibliopolis, 1980), Marxismo e storia. Saggio sull’innovazione storiografica in Italia (1945-1970) (FrancoAngeli, 2006) and Il Marxismo e le sue storie (FrancoAngeli, 2016).

All interested in the origins of Marxism in Italy, the development of the Italian workers' movement, and the growth of 'Marxism' as a doctrinal system.

Chapter One
The 1860s and 1870s: Marxism rejected, and the humus of Marxism
1.1 The democratic antithesis
1.2. The anarchist antithesis

Chapter Three
The Marxism of the 1890s: Foundation – and Orthodoxy?
3.1. The ‘Partito marxista’
3.2. Between ideology, science, utopia and religio
3.3. ‘The anatomy of civil society’
3.4. The end-of-century Marxist corpus

Chapter Five
Marxism and Reformism
5.1. Did reformism have theoretical roots? On the question of ‘catastrophism’
5.2. Turati, the ‘Marxist’ and ‘reformist’
5.3. The economic theory of the workers’ movement
5.4. The articulations of non-Marxist reformism, the returns of history, and again on reformist Marxism

Chapter Six
Marxism and Revolutionary Syndicalism
6.1. Did syndicalism have roots in end-of-the-century ‘revisionism’?
6.2. Early definitions of a ‘Left’-Marxism
6.3. Enrico Leone’s and Arturo Labriola’s Marx in the ‘high’ period of syndicalist theory
6.4. Marxism and elitism in the universe of ‘minor’ syndicalist intellectuals
6.5. De hominis dignitate. A workers’ syndicalist Marxism? La Scintilla in Ferrara and Il Martello in Piombino