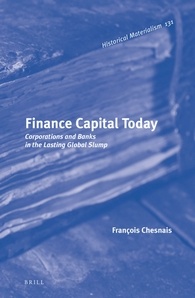 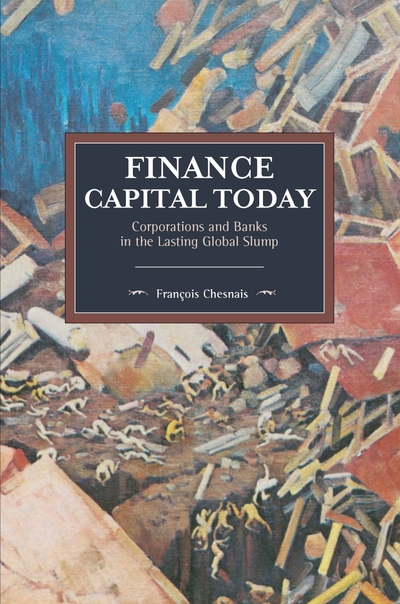 Corporations and Banks in the Lasting Global Slump

Finance Capital Today presents a rich new analysis of the specific features of contemporary capitalism, notably its truly global nature and its financialisation, calling on Marxist analyses of the concentration, centralisation and globalisation of capital and Marx’s theory of interest-bearing and fictitious capital. Chesnais shows how financial globalisation and the exponential growth of financial assets have developed alongside the globalisation of productive capital, paying special attention to the contemporary operations of transnational corporations and global oligopoly. He argues that the macroeconomic perspective is one in which large amounts of capital are looking for profitable investment in a setting of underlying overproduction and low profits. The outcome will be low global growth, repeated financial shocks and the growing interconnection between the environmental and economic crises.

François Chesnais is Emeritus Professor at Université-Paris Nord. From La mondialisation du capital (1994) to Les dettes illégitimes (2011), he has written and edited numerous books on financial globalisation, many of which have also been published in Portuguese, Spanish and Italian.

All interested in globalisation, financialisation, Marx’s approach to finance and Marxist interpretations of the world economic and financial crisis.

1. The Historical Setting of the Crisis and Its Original Traits
1. The Crisis in a Long-Term Trajectory
1.1 In the advanced capitalist countries, slowing accumulation before the deep break in 2008
1.2 The bourgeoisie’s fight against the immanent barriers of capitalist production
1.3 The fall in the rate of profit and the play of the counteracting factors
2. A Crisis Which Has Not Been Allowed to Run Its Course
2.1 A mountain of fictitious capital alongside over-accumulation and overproduction
2.2 Global over-accumulation and overproduction with China as a central locus
2.3 The globalisation of the labour force, the cornerstone of capital’s strength

2. Financial Liberalisation and Globalisation from the 1960s onwards and the Return of Financial Crises
1. Industrial Profits and the Eurodollar Market in the Resurgence of Concentrated Interest-bearing Capital
2. The End of the Bretton Woods Monetary System and the Advent of Floating Exchange Rates
3. The Recycling of Petrodollars and the Third World Debt Trap
4. The Growth of Government Debt at the Heart of the System
5. The Political Implications of Market-Based Retirement Schemes
6. World Money Since the Demise of Bretton Woods
7. The ‘Semi-Completion’ of Financial Globalisation and the Financial Crises of the 1990s
Appendix 2: The ‘Club of Paris’ and Brady bonds

4. The Organisational Embodiments of Finance Capital and the Intra-Corporate Division of Surplus Value
1 A Brief Historical Perspective on the Bank-Industry Relationship
1.1 Germany: The ‘unification of capital’ and a strong bank influence in industry
1.2 Money trusts as the US form of finance capital
1.3 The prevalence of imperial financing priorities in Britain
1.4 France: State support to industry and large foreign government loans
2 Contemporary Issues Regarding Corporate Governance and Interlocking Boards of Directors
2.1 Control under contemporary US corporate governance
2.2 Cross-country interlocking boards of directors and ‘transnational capitalist class formation’ in Europe
3 Banks as Merchants and TNCs as Money Capitalists
3.1 The operations of financial conglomerates in commodities trading and production
3.2 The financial operations of TNCs
4 Concentrated Commodity or Merchant Capital and the Sharing Out of Total Surplus Value
4.1 The notion of ‘profits in circulation’
4.2 Large commodities traders
4.3 Large retailers
5 Natural Resource-based Monopoly Profit and Oil Rent
Appendix 4.1: Control in the ETH Zurich studies
Appendix 4.2: The three major New York investment banks’ activities in commodities
Appendix 4.3: Three examples of industrial corporation ownership of financial corporations

5. The Internationalisation of Productive Capital and the Formation of Global Oligopolies
1 The Internationalisation of Productive Capital: Theory and History
1.1 Foreign production of surplus value in the classical theory of imperialism
1.2 The internationalisation of productive capital in contemporary theory
1.3 Stages in the internationalisation of productive capital
1.4 From horizontal to vertical integration and the intra-corporate division of labour
1.5 The ownership-location-internalisation theoretical paradigm
2 The Collective Global Monopoly Power of Industrial Capital
2.1 Mergers and acquisitions and the international concentration of capital
2.2 Scant data on domestic concentration and little to none on global concentration
2.3 Non-price and price competition in global oligopolies
3 The Place of Emerging Countries’ Corporations in the Global Oligopoly
3.1 Sovereign wealth funds
3.2 FDI by developing-country TNCs and modes of foreign entry by China, India and Brazil
Appendix 5: Recent Developments Affecting the Statistical Data on FDI

6. The Operational Modes of TNCs in the 2000s
1 Industrial Capital: From Internationalisation to Globalisation
2 Value Chains in Business Management Theory
3 Buyer-Driven Global Commodity Chains
4 Outsourcing and Offshoring and Global Value Chains in Manufacturing
5 ‘Non-Equity Modes Of International Production’
6 TNCs and the Present Configuration of World Trade
7 Overexploitation and the ‘Global Law of Value’

7. The Accelerated Growth and Further Globalisation of Financial Assets and Markets
1 Factors Underlying the Growth of Global Financial Transactions
1.1 On the driving forces of financial accumulation again
1.2 Capital flows in and out of the United States
1.3 Intra-Eurozone interbank lending
1.4 The growth and present organisation of foreign exchange trading
2 The Growth of Global Transactions in Derivatives
2.1 A new form of fictitious capital
2.3 The theory of derivatives as the ‘contemporary form of world money’
3 Financial Globalisation and Developing Countries in the 2000s
3.1 The diminution of external debt and the renewed attractiveness of developing countries
3.2 The ‘internalisation’ of government debt: The case of Brazil
3.3 The audit and cancellation of illegitimate debt by Ecuador
3.4 The 2002 Argentinian default

8. Financialisation and the Transformation of Banking and Credit
1 The Transformation of Banking in the United States
1.1 ‘Traditional’ banking and credit intermediation
1.2 The start of deregulation and the transition to a market-intermediated credit system
1.3 US bank concentration in the 1990s
2 Financial Liberalisation in Europe and European ‘universal banks’
2.1 The course of financial liberalisation in Continental Europe
2.2 Three types of banks in the EU
2.3 The full restoration of the European ‘universal bank’
3 Securitisation, the Originate-to-distribute Model and the Shadow Banking System
3.1 The ‘originate-to-distribute’ banking model
3.2 The large-scale build-up of fictitious capital on household mortgage
3.3 The shadow banking system
3.4 Global Systemically Important Financial Institutions and the global banking oligopoly

9. Global Contagion and Systemic Crisis in 2008
1 Investment Banks and Hedge Funds
1.1 High-risk leverage driven by low profitability
1.2 Investment banks
1.3 Hedge funds: The absence of regulation as a key enabling feature
1.4 Highly leveraged speculative investments alongside ‘vulture’ hedge fund operations
1.5 Investment banks’ proprietary trading and prime brokerage for hedge funds
2 The Channels of International Financial Contagion
2.1 The channels of international financial contagion in the 1990s
2.2 Contagion through the transatlantic shadow banking system
3 Specific Systemic Vulnerability in the European Banking System
3.1 The Maastricht Treaty construction
3.2 Asymmetric intra-European relationships and the effects of shadow banking
3.3 From imported to self-generated financial crisis in the EU
3.4 Greece as an in vivo political and social experiment

Conclusion
The institutional difficulties of doing Marxist economic research
Persistent very low global growth coupled with endemic financial instability
How could slow growth be brought to an end and a new long upswing start?
The convergence of global economic and ecological crisis
Non-ecological approaches to the notion of capitalism’s possible absolute limits
The advent of a new more formidable immanent barrier and its implications