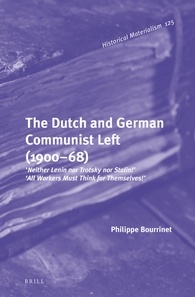 ‘Neither Lenin nor Trotsky nor Stalin!’ - ‘All Workers Must Think for Themselves!’

The Dutch-German Communist Left, represented by the German KAPD-AAUD, the Dutch KAPN and the Bulgarian Communist Workers Party, separated from the Comintern (1921) on questions like electoralism, trade-unionism, united fronts, the one-party state and anti-proletarian violence. It attracted the ire of Lenin, who wrote his Left Wing Communism, An Infantile Disorder against the Linkskommunismus, while Herman Gorter wrote a famous response in his pamphlet Reply to Lenin. The present volume provides the most substantial history to date of this tendency in the twentieth-century Communist movement. It covers how the Communist left, with the KAPD-AAU, denounced 'party communism' and 'state capitalism' in Russia; how the German left survived after 1933 in the shape of the Dutch GIK and Paul Mattick’s councils movement in the USA; and also how the Dutch Communistenbond Spartacus continued to fight after 1942 for the world power of the workers councils, as theorised by Pannekoek in his book Workers’ Councils (1946).

All interested in the history of the non-leninist communism and council communism, and anyone concerned with Herman Gorter’s Open Letter to Comrade Lenin and Anton Pannekoek’s Workers’ Councils.

1: Origins and Formation of the ‘Tribunist’ Current (1900–14)
Religion, capitalism and colonial empire: from the ‘golden age’ to the decline
The beginnings of the workers’ movement
Domela Nieuwenhuis, the SDB and the SDAP
Domela Nieuwenhuis and the roots of ‘councilism’
The beginnings of the SDAP – The three Marxist generations – Troelstra and the right of the party
Marxism’s first struggles against revisionism
The 1903 transport-strikes
The Marxist opposition within the SDAP (1903–7)
The birth of the ‘Tribunist’ movement
The split at the extraordinary congress at Deventer (13–14 February 1909)
The SDP’s activity in the Netherlands before 1914
The SDP and the colonial question – The Tribunists and Sneevliet in Indonesia
The Dutch left and its influence on German radicalism
a) First contacts with German Social Democracy
b) Pannekoek as ‘professional revolutionist’
c) Pannekoek in opposition: the ‘Bremen left’ (1909–14)

2: Pannekoek and ‘Dutch’ Marxism in the Second International
The philosophical bases of radical Marxism in the Netherlands
a) Marxism: science, method, and ‘ideology’ of the proletariat
b) The influence of Dietzgen
c) The struggle against ideology: Marxism against Darwinism and neo-Kantism; the new ethics of the proletariat
d) The Dutch left’s conception of class-consciousness
The ideological obstacles to the proletarian revolution
a) Religion
b) Revisionism and anarchism
From the mass-strike to the proletarian revolution
a) The debate on the mass-strike in the Second International before 1905
b) The Dutch-German left and the mass-strike. Henriëtte Roland Holst and Rosa Luxemburg
c) The struggle against Kautskyist centrism
d) The new tactic of mass-action: Pannekoek vs. Kautsky and the question of the state
War or world-revolution?
a) Crisis and imperialism
b) Nation or class? The national question
c) The alternative: world-war or world-revolution

3: The Dutch Tribunist Current and the First World-War (1914–18)
Social Democracy and Tribunism facing the war
Gorter’s political and theoretical combat against the war
a) The nature of the war
b) The decline of the capitalist system
c) The bankruptcy of Social Democracy and Kautskyism
d) The future
The SDP and the Zimmerwald Conference
The development of the SDP: between revolution and opportunism
The SDP in 1917: its attitude to the Russian Revolution
a) The first signs of the coming revolution in the Netherlands
b) The SDP leadership and the Russian revolution
c) The Russian and the worldwide revolution
1918: between revolution and opportunism. The birth of the Dutch Communist Party
a) The minority’s offensive inside the SDP: fraction and opposition
b) The abortive revolution of November 1918
c) The formation of the Dutch Communist Party (CPH/CPN)

PART II: THE DUTCH COMMUNIST LEFT AND THE WORLD-REVOLUTION (1919–27)

4: The Dutch Left in the Comintern (1919–20)
The left-currents in the Comintern (Communist International) in 1919.
The German question
The Amsterdam Bureau (1919–20)
The KAPD and the Dutch minority of the CPN
The turning-point of the Second Congress: infantile or lethal disorder of communism?
The communist left’s arguments against Lenin’s book Left-Wing Communism, An Infantile Disorder
a) The ‘historic course’ and opportunist tactics
b) The role of the communist party – ‘masses and leaders’
c) The ‘Western-European revolution’ and ‘proletarian tactics’
d) The union-question
e) The rejection of ‘revolutionary parliamentarism’
f) ‘The meridian-argument’

5: Gorter, the KAPD and the Foundation of the Communist Workers’ International (1921–7)
The retreat of the world-revolution – The 1921 ‘Kronstadt tragedy’ and March Action
a) The tragedy of Kronstadt (March 1921)
b) The 1921 March Action
The exclusion of the communist left from the Comintern
a) The left of the Dutch Communist Party
b) The exclusion of the Bulgarian left-communists from the Comintern
c) The exclusion of the German communist left
Gorter, the KAPD and the building of the KAI
a) The Russian question: state-capitalism, party and International
b) The extraordinary congress of the KAPD (11–14 September 1921), and the question of forming the KAI
c) The denial of the economic struggle
The split in the KAPD and its international consequences
a) The March 1922 split
b) Gorter and the Essen current
c) The decomposition of the Essen tendency
d) The birth of a Berlin current in the Dutch KAP

Introduction: The Group of International Communists: from Left-Communism to Council-Communism
The origins of the GIC
The GIC press
Intervention in the class-struggle and the GIC’s audience
The functioning of the GIC: the working-groups
The GIC’s militants

7: Towards a New Workers’ Movement? The Record of Council-Communism (1933–5)
German council-communism after 1933 – its relationship with the GIC – definition of the ‘councilist’ current
The adoption of the Theses on Bolshevism (1934)
a) The ‘bourgeois’ nature of Bolshevism
b) The Significance of the Theses on Bolshevism
c) The contradictions of the GIC
Towards a new workers’ movement? – The theses of the GIC (1935)
a) A theory of defeat
b) The ‘new workers’ movement’ and the ‘working-groups’
c) The ‘working-groups’ and the revolutionary party
d) The function and functioning of the ‘working-groups’
e) The contradictions of the ‘new workers’ movement’
f) The Copenhagen Conference (8–11 June 1935) and its consequences
An ‘economistic’ vision of the revolution? The Grundprinzipien
a) The means of the proletarian revolution: the committees of struggle
b) The period of transition from capitalism to communism: the Grundprinzipien
c) Pannekoek’s position on the Grundprinzipien

8: Towards State-Capitalism: Fascism, Anti-Fascism, Democracy, Stalinism, Popular Fronts and the ‘Inevitable War’ (1933–9)
The theories of capitalist collapse
a) Theoretical differences in the council-communist movement
b) Crisis-theory according to Pannekoek and the GIC
Fascism and anti-fascism
The question of state-capitalism
Class-struggle and the Popular Front: a new course?
a) The struggle of the Amsterdam unemployed (July 1934)
b) The GIC and the strikes of May-June 1936
The ‘inevitable war’ – war and war-economy

9: The Dutch Internationalist Communists and the Events in Spain (1936–7)
The divisions amongst the Dutch council-communists
The lessons drawn by the GIC from the events in Spain
a) No ‘bourgeois revolution’
b) ‘Anti-fascist front’ or ‘proletarian revolution’?
c) The ‘lessons of July 1936’ in Spain
d) The ‘tasks of the proletariat’ in Spain and Europe
e) ‘The first task is the destruction of the state’
f) ‘Proletarian revolution’ in every country?
The GIC and the anarchist current
The GIC and the Paris international conference on Spain (March 1937)

10: From the ‘Marx-Lenin-Luxemburg Front’ to the Communistenbond Spartacus (1940–42)
The Dutch council-communists and the war
The political work of Anton Pannekoek: The Workers’ Councils
From the RSAP to the ‘Marx–Lenin–Luxemburg Front’. – The ‘third front’ against the war
The strike of February 1941 and its political consequences
The rejection of defence of the USSR – the break with Trotskyism
The decapitation of the MLL-Front leadership (1942)

11: The Communistenbond Spartacus and the Council-Communist Current (1942–68)
The birth of the Communistenbond (1942–5)
The Bond from 1945 to 1947
a) The composition, organisation, and activities of the Spartacus group
b) The congress of December 1945 – the theses on the party
The necessity of the party: coming to consciousness
a) The party’s tasks: theory and praxis
b) The party’s functioning
c) The ‘link with the working class’
d) Party and state in the revolution
e) The splits
The political record of the Communistenbond
a) The Russian question
b) The colonial and national question
c) The union-question
d) The development of the class-struggle and the councils
The ‘Brussels International Conference’ (25–26 May 1947)
The return to the positions of the GIC
The decline of Dutch ‘councilism’
International council-communists up to the 1970s

Conclusion
A ‘Dutch school of Marxism’?
A ‘Germanic’ or ‘Western-Marxist’ current?
A ‘petty-bourgeois intellectual’ current?
A ‘syndicalist’ current?
A ‘utopian-extremist’ and ‘messianic’ current?
Continuity and discontinuity between left-communism and ‘councilism’

Appendix: Minutes of the First ‘Ordinary’ Congress of the KAPD (1–4 August 1920)