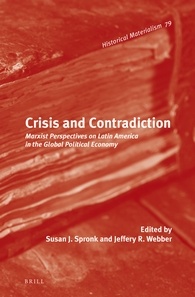 Marxist Perspectives on Latin America in the Global Political Economy

Since the late-1990s much of Latin America has experienced an uneven and contradictory turn to the Left in the electoral arena. At the same time, there has been a rejuvenation of Marxist critiques of political economy. Drawing on the expertise of Latin American, North American, and European scholars, this volume offers cutting-edge theoretical explorations of trends in the region, as well as in-depth case studies of Argentina, Bolivia, Brazil, and Venezuela. Essays in the volume focus on changes to class formation in Latin America and offer new insights into the state-form, exploring the complex relationship between state and market in contexts of late capitalist development, particularly in countries endowed with incredible natural resource wealth.

This book will define new debates on Latin American political economy. It superbly delivers fine-grained empirical commentary on the composition of working class politics across the region (in Bolivia, Argentina, Venezuela and Brazil), as well as theoretical exposure of the specificities of states and markets within the uneven and combined development of capitalism shaping Latin America. With leading political economists at the helm, this whopper of a book truly brings fresh radical perspectives to bear on the struggles against capitalist power within Latin America. Ignore it at your peril.
− Adam David Morton, University of Sydney and author of Revolution and State in Modern Mexico: The Political Economy of Uneven Development

Crisis and Contradiction: Marxist Perspectives on Latin America in the Global Economy is the indispensable source for students, academics and activists interested in the transition to neoliberalism in Latin America. If Latin America is the region in which, perhaps more than any other, the left needs urgently to take an interest, the contributors to this volume have taken up the challenge. They offer a vast, detailed and richly informative survey of recent political and economic developments in Bolivia, Venezuala, Argentina, and elsewhere, and have produced a volume which will serve both as a testament to the vitality of the left in Latin America, and a proof of the excellence of Marxist scholarship on the region. Susan Spronk's and Jeffery R. Webber's book is the finest example of its kind to date.
− Alfredo Saad-Filho, SOAS, University of London and author of The Value of Marx

List of Figures and Tables
Acknowledgements
Note on Contributors

PART II: STATE AND MARKET IN LATE CAPITALIST DEVELOPMENT
9. Conspicuous silences: State and Class in Structuralist and Neo-structuralist Thought, Juan Grigera
10. Sugarcane Ethanol: the Hen of the Golden Eggs? Agribusiness and the State in Lula’s Brazil, Leandro Vergara-Camus
11. From Global Capital Accumulation to Varieties of Centre-Leftism in South America: The Cases of Brazil and Argentina, Nicolas Grinberg and Guido Starosta
12. The Three Dimensions of the Crisis, Claudio Katz
13. Revolution against ‘Progress’: Neo-Extractivism, the Compensatory State, and the TIPNIS Conflict in Bolivia, Jeffery R. Webber