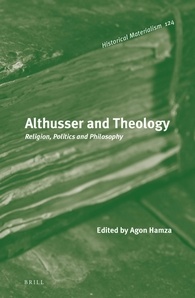 Religion has always been an object of philosophical analysis, as well as a platform for political practice. One cannot imagine a form of philosophical thinking without its relation to a religion, whether it negates or affirms the latter. In different philosophical orientations, religion also serves as a condition for philosophy.

Althusser and Theology intends not so much to fill a gap in Althusser scholarship as to make an important contribution to the contemporary radical left movement. In this regard, Althusser and Theology is of significant importance in the current debates on the Left concerning its relation to theology. It will also contribute to the ongoing debate on Althusser, as well as opening up a new perspective on his philosophical project.

Agon Hamza is a PhD candidate in Philosophy at the Postgraduate School ZRC SAZU in Ljubljana, Slovenia. He serves as the co-editor-in-chief of the international philosophical journal Crisis and Critique. His latest publications are Repeating Žižek (2015), a co-authored book with Slavoj Žižek, entitled From Myth to Symptom: The Case of Kosovo (2013) and Althusser and Pasolini: Philosophy, Marxism and Film (2016).

“In a moment of very strong development for the Althusserian Studies, which also marks the 50th anniversary of the publication of For Marx and Reading Capital, Agon Hamza and collaborators come up with a completely original and path breaking collection of essays on Althusser’s religious and theological background, which highlight a decisive side of his thought and commitments. Beginning with a superb memorial piece by Stanislas Breton, who was perhaps Althusser’s closest friend and interlocutor in the last years, and ending with a bold “Althusserian” analysis of contemporary theological-political confrontations of the West with Islamic movements, it encompasses many different encounters and categories. Conventional images are broken and exciting hypotheses are tested. I recommend it to every scholar and student of contemporary philosophy who wants a fresh perspective.”
-- Etienne Balibar, Emeritus Professor of Philosophy, Anniversary Chair in Contemporary European Philosophy, Kingston University.

“I became a communist because I was a Catholic,” Althusser claimed in an interview in 1980. The present volume is the first to explore in depth his relationship to the Christian-Catholic legacy, a legacy he never renounced, despite of his loss of faith after the war, but rather transformed it into a new opening towards the materialist dialectics. Agon Hamza has gathered a formidable group of scholars who provide ample reflection, from a variety of perspectives, on the profound trace this legacy has left throughout Althusser’s oeuvre and that may well serve as a clue to his thought. A must reading for all of us for whom Althusser’s theoretical intervention still represents a crucial turn.
-- Mladen Dolar, University of Ljubljana

Louis Althusser transformed the entire field of the materialist theory of ideology with his two contributions: outlining the process of interpellation as the central ideological mechanism, and conceiving ideology as a set of material practices and rituals. Althusser himself began as a Catholic thinker, so no wonder that both of these features inherently relate to theology. The volume edited by Agon Hamza explores in detail all the implications and inconsistencies of this link between Althusserian theory of ideology and theology. It demonstrates how Althusser remains a central point of reference in today's revival of the theologico-political. It brings us into the very heart of today's intense debates, and is thus simply indispensable for anyone interested in our spiritual predicament – which ultimately means for everyone who is engaged in serious thinking.
-- Slavoj Žižek

Chapter 3
Althusser and the Problem of Eschatology
Warren Montag

Chapter 5
Splitting Althusser at the Point of Religion
Gabriel Tupinambá

Chapter 6
Between Hegel and Marx: History and Theology in the Early Althusser
Geoff Pfeifer

Chapter 9
Paul of Tarsus, Thinker of the Conjuncture
Ted Stolze

Chapter 10
From the ‘Hidden God’ to the Materialism of the Encounter: Althusser and Pascal
Panagiotis Sotiris

Chapter 12
Battles of Nostalgic Proportion: The Transformations of Islam-as-Historical-Force in the Ideological Matrix of a Self-Affirming ‘West’
Isa Blumi