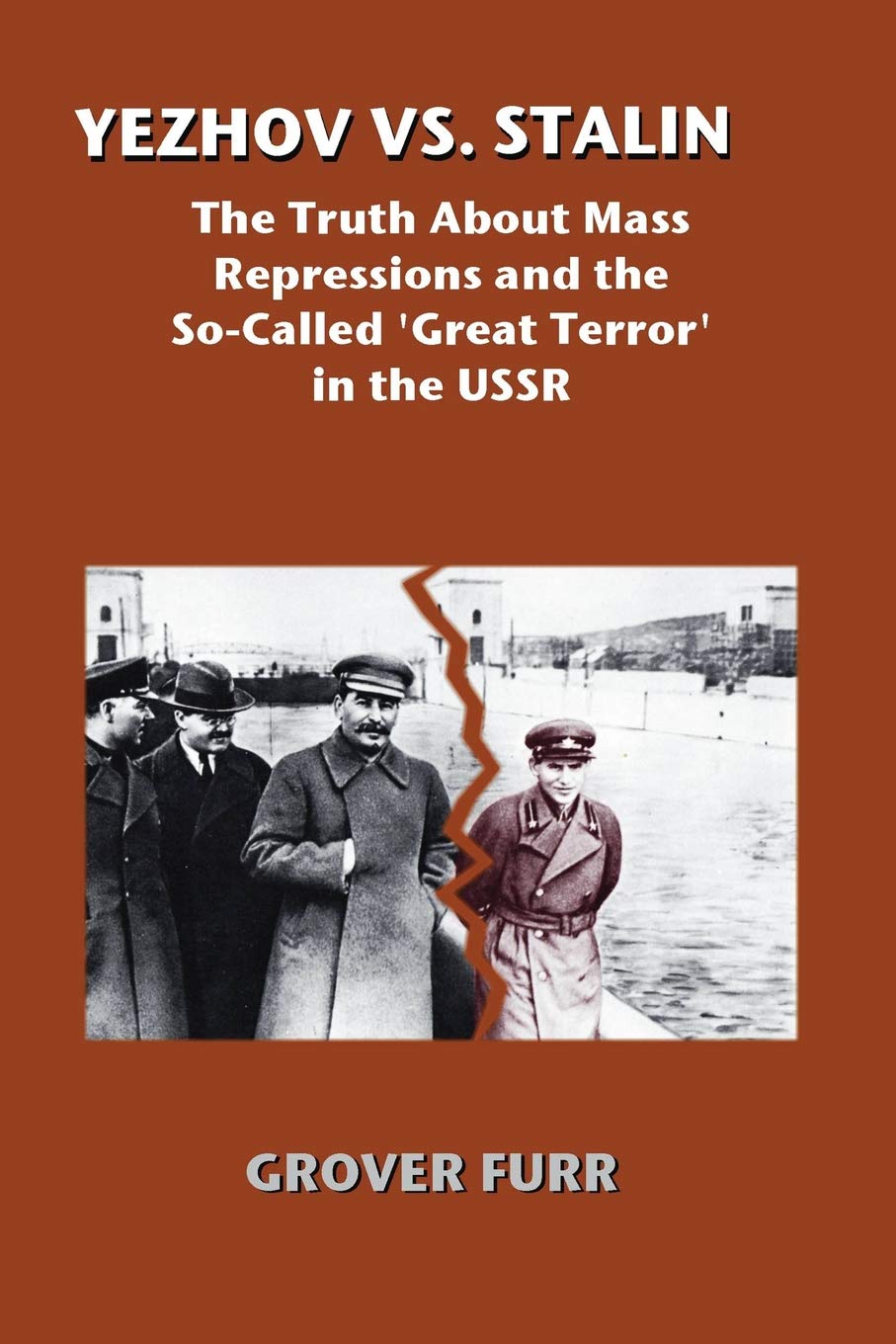 Grover Furr’s book Yezhov Vs. Stalin,1 modestly subtitled ‘The truth about the mass repressions and the so-called “Great Terror” in the USSR’, has just been published in French.2 Furr is talking nonsense. To refute this nonsense is all the less necessary since Stalin himself did it masterfully on the central question of repression, as we shall see below. Furr invents a Stalin who was a fanatical supporter of democracy, bullied by his regional secretaries. Engaging in a very unmaterialistic introspection of Stalin’s brain, Furr claims that, for Stalin, ‘the party had to run the organisations, but not the legislative or executive organs of the state. Once the party was deprived of direct control of society, Stalin believed that its role should be limited to agitation and propaganda’ (p. 19).

Alas, at the Central Committee plenum in June 1936, ‘the delegates had unanimously approved the draft constitution. But none of them had spoken in favour of it. This failure to give at least lip service to a proposal of Stalin’s certainly indicated latent opposition’ (p. 22). He repeats: ‘Many elements [about whom Furr is mysteriously silent] suggest that the central leadership [i.e. Stalin] wanted... to continue to implement the open and secret ballot elections of the new constitution’ (p. 59). He insists: ‘Stalin and those close to him in the central Soviet government and the party fought for such elections but failed to get the Central Committee to approve them’ (p. 61). As a tragic result: ‘The Central Committee plenum of October 1937 saw the final cancellation of the project of open elections to the soviets... This represented a serious defeat for Stalin and his supporters in the Politburo’ (p. 79).

How curious! Stalin could not impose on the Central Committee the democracy to which he so deeply aspired, but he could, at the June 1937 plenum of this body which was supposed to lead the party, exclude 31 members, who were then arrested and shot in the following months! When the plenum met in January 1938, only 28 remained of the 71 members elected in January 1934. Stalin’s supposed victors were liquidated. Some victories have a curious taste of defeat!

According to Furr, finally, Yezhov ‘carried out a massive repression of innocent people and deceived Stalin and the Soviet leaders into seeing this as a battle against subversion’ (p. 132), in order to arouse popular discontent. He repeats this several times as if the repetition of a fable should, by some mysterious alchemy alien to historical materialism, transform it into truth. The repression unleashed in July 1937 had mown down nearly 750,000 men, women and children by the end of 1938. Furr claims: ‘Yezhov’s own confessions prove that Stalin and the Soviet leadership were not responsible for his mass executions’ (p. 107). This was the final service Yezhov would render to Stalin. Furr adds: ‘As soon as Yezhov resigned, to be replaced by Beria, orders were given to stop all repression immediately, to abrogate all operational orders of the NKVD’ (p. 100). But Stalin himself refutes this. In March 1939, at the 18th Congress of the Communist Party, he declared: ‘We will no longer have to use the method of mass purge’ (stenographic report of the 18th Congress, p. 28). The meaning of this statement is clear: Stalin assumes responsibility for the repression unleashed in 1937 and justifies it by calling it a ‘purge’, i.e. the elimination of elements declared harmful or hostile; he does likewise for 1938, but reduces its scope; from ‘massive’ it was to become more targeted or selective, but would not disappear – contrary once again to Furr’s misleading statements.

Furr is a confirmed supporter of Stalin and has certainly read this speech, but, practising the art of camouflage, he conceals it from his reader.

Finally, Furr has discovered that Yezhov, arrested on 10 April 1939, had been a German agent... A pathetic discovery! Yezhov, knowing better than anyone the methods used by the NKVD to make the accused confess, and certainly not wishing to suffer these until he broke, quickly ‘confessed’ that he had been working for the Germans since 1932. Furr considers his confession to be perfectly sincere. At any rate, his investigators left proof (?) that Yezhov was free to confirm or deny what he was accused of. When the investigator Bogdan Kobulov, on 11 May 1939, reminded him that he had beaten his wife when he discovered she was sleeping with the writer Mikhail Sholokhov, Yezhov denied it. Kobulov then read him a testimony that confirmed it. Furr understands the message and gloats: ‘These two passages are proof that... the investigation was genuine’ (p. 184). Everything that the investigator dictated to him and that he finally signed is therefore true. But, in view of the accusation of being a German agent since 1932, of having sent hordes of innocent people to their deaths, of having planned the assassinations of Stalin and Molotov and a coup de force for 7 November 1938, what does it matter that Yezhov, unhappy at being cuckolded, had slapped and punched his wife yet was given the right to deny this in order to better present his confessions as voluntary?

Furr’s trademark, that of an unintentional comedian, is the grotesque. Let us recall the contortions he achieved in Khrushchev Lied, where he asserted without laughing ‘the existence of a series of rightist/Trotskyite/anti-government plots’, and added: ‘There is plenty of circumstantial evidence to suggest [sic! evidence that merely ‘suggests’ clearly proves nothing] the hypothesis that Khrushchev himself may [resic!] have participated in this rightist/Trotskyite conspiracy…The hypothesis that Khrushchev may [rereresic!] have been a member of a secret branch [which, being secret, has left no trace!] of the highly ramified Trotskyite/rightist conspiracy is reinforced by the fact that he was certainly (rereresic!) involved in a number of other conspiracies’, unknown to all, but of which Furr draws up a list consisting mainly of accusations of concealment and destruction of documents, and which is replete with such shocking formulae such as ‘Khrushchev was to [?] lead another conspiracy...’ followed by a litany of ‘it may be assumed that’, ‘very likely’, ‘probably’, ‘it seems probable that’, not to mention the superb formula: ‘A large number of researchers and officials, including of course party officials loyal to Khrushchev, but as yet unknown to us [sic!], must have [resic!] been involved (Khrushchev Lied, pp. 34-5 and 220-1).3 These ‘unknowns who must have been involved’ represent... perhaps one of the high points of historical research. In essence Furr is telling his readers: I don’t know, but I am sure.

So, in summary, for him it seems ‘perhaps probably likely’ that Khrushchev was a member of a large number of conspiracies that were poorly, little, or not at all known but detected by Furr, and thanks to which Mr K became First Secretary of the CPSU. This is the method of the conjurer, with one nuance: the conjurer succeeds in his tricks, Furr fails in them all.

Thus, in his Yezhov Vs. Stalin, Furr forgets to ask one awkward question (among many others). If all of Yezhov’s actions as a German agent were aimed at stirring up the Soviet population against Stalin and his government, why was he not made to confess to this sinister plan – and thus exonerate the Soviet leadership and Stalin from its painful consequences – in a public trial, as Stalin had done with his predecessor Yagoda? Instead, Yezhov was sentenced to death on 4 February 1940 and immediately shot.

The answer is childishly simple, although it is, Furr might comment, ‘perhaps probably likely’ not in any of the documents on the Yezhov case. On 23 June 1939, Hitler and Stalin had signed a ten-year non-aggression pact with a secret protocol for partitioning Poland. How could a public trial of a so-called ‘German agent’ be organised in this period, which also saw, in a nice practical collaboration, Stalin handing over to the Gestapo dozens of German Communists who had taken refuge in the USSR, among them Margarete Buber-Neumann, wife of a former leading figure in the KPD and editor-in-chief of its daily newspaper Die Rote Fahne, Heinz Neumann. The latter, by a typically Stalinist miracle, escaped this touching manifestation of German-Soviet friendship, a subject on which Furr – unable despite the many contortions of his meagre thinking to attribute it either to Trotsky or to Yezhov, already in prison at the time – does not say a word. For Stalin had had Neumann arrested in 1937 and shot a few months later. The killer Yezhov had nothing to do with it: as early as 2 May 1934, when Yagoda was still at the head of the NKVD, Stalin had declared to Dimitrov: ‘Neumann... He’s a political degenerate’ (Georgi Dimitrov, Journal 1933-1949, p. 123). His fate was therefore already sealed. Only the date was left open.

It was better to kill Yezhov discreetly, far from the noise of the street, in one of those discreet cellars that he knew so well...