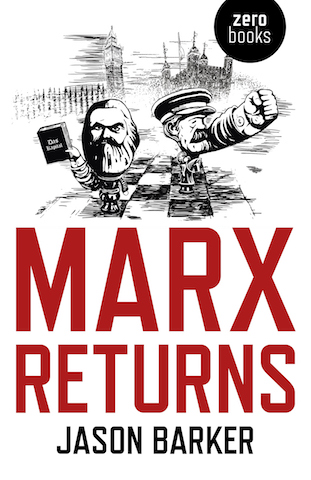 Chris Rumble reviews Marx Returns by Jason Barker (2018, Zero Books). Following several disappointing portrayals, a new novel by the author and filmmaker takes an ingenious look at why Karl Marx might have been right after all.

Why have recent dramatic portrayals of Karl Marx been so underwhelming? This spring saw the release of a Franco-German feature film—Raoul Peck’s The Young Karl Marx—and last autumn a London stage play—Young Marx, directed by Nicholas Hytner. As the almost identical titles confirm, this is Marx in his early and energetic prime, when Europe was gripped by war and revolutions, and when changing the world went far beyond the cosy confines of saloon bar philosophy.

Unfortunately very little of that energy comes across in either production. In the case of Peck’s film, the actors put in convincing performances—especially August Diehl as a brittle and brilliant Marx—but the narrative can’t decide what the characters, forever hostages to political fortune, were ultimately trying to achieve. The problem stems from the fact that Peck’s is what might technically be described as a “simple” plot. There is no moment of reversal or revelation, either in Marx’s personal life (what baggage is he carrying?) or political life. This is not wrong only in dramatic terms: it is based on a factual error. Marx becomes a communist around the time of his meeting with Engels in Paris in the summer of 1844. But communism is certainly not there from the start, and not in 1842 when Marx wrote his controversial article for the Rheinische Zeitung against the laws of wood theft, which Peck begins his film with.

Young Marx at the Bridge Theatre in London, a high velocity farce featuring Rory Kinnear in the lead role, also suffered from a script that couldn’t make up its mind. The standout feature of the production were the sets, which made use of a state-of-the-art revolving stage that hurtled in ready-made interiors—from Marx’s Soho flat to the reading room of the British Museum—with giddying production line-efficiency. This was a “clever” production that reminded me of Francis Wheen’s Marx biography, which obviously “inspired” several scenes. Unfortunately there were none of the subtle nuances of Howard Zinn’s Marx in Soho, which the writers clearly hadn’t seen. It might be difficult to put philosophy on stage, but that needn’t mean that philosophy should be absent, or indeed that it can’t aid the drama. Every line that mentioned capitalism or the labour theory of value came across as a description lifted from a Marx primer.

Biographies of the great man have been more promising. After all, fact is often stranger than fiction—when the facts are correct.

Take Wheen’s biography, Karl Marx: A Life, published in 2000 to universal acclaim, in which the author alleges that Marx fought duels in his youth. Or the more recent biography of Marx’s daughter Eleanor by Rachel Holmes, whose second chapter offers up this gem (the year under discussion is 1836): “[Marx] persuaded his father that Berlin was the best place for legal studies, but in truth it was a ruse for him to follow his desire to be taught by one of Germany’s most contentious philosophers, Georg Hegel, who earned his living as a professor at the university to support his philosophising.”

Quite some “desire” indeed, given that Hegel died in 1831. Holmes continues: “From Berlin, Karl was heartbroken to hear from his sister Sophie that Jenny’s engagement to Lieutenant Karl von Pannewitz had been announced.” Presumably the news took quite some time to sink in, given that Jenny was briefly engaged to von Pannewitz at the age of 17, i.e. in 1831.

Mary Gabriel’s Love and Capital: Karl and Jenny Marx and the Birth of a Revolution is more solidly written and researched, but before long the book’s mawkish his ’n’ hers sentiments begin to grate. Why Karl and Jenny? In order to absolve her other half of his scandalous behaviour? I’m referring of course to Herr Marx’s affair with the family housekeeper Helene Demuth, who in 1851 gave birth to a healthy son who was instantly given up for adoption: the unspoken confirmation in Victorian London of an illegitimate child. Gabriel defers to the established view that Marx was the father, albeit in a footnote (the literary equivalent of an uninvited guest who needs to be tucked away as discreetly as possible).

It’s worth noting briefly that Rolf Hosfeld’s intellectual biography of Marx simply takes Marx’s paternity for granted, acknowledging it in a single paragraph. Contrast this with Terrell Carver’s painstaking attempt to prove, beyond all reasonable doubt, that Marx was not Freddy Demuth’s father after all.

The course of true love never did run smooth. Indeed, in Marx’s case it runs far off the beaten track, passing through the subterranean borrows of fiendish devils, ghouls and monsters: ghosts in the halfway house of reason. Communist specters, whose concern for the well-being of humanity, let alone its central protagonists, is entirely coincidental.

This brings us to Jason Barker’s Marx Returns a somewhat unusual and ingenious addition to the genre of Marx “fiction.” Barker sets out on the assumption that if writing a Marx biography is so fraught with conjecture, why not write a novel instead? Why let the facts get in the way of a good story? Why, indeed.

Having already written and directed the German documentary Marx Reloaded, in his debut novel Barker gives free rein to his imagination. Feeling under no obligation to pussyfoot around or defer to politically correct decorum in the portrayal of Marx family affairs, Barker announces his approach in the novel’s preface, stating that many of its made up incidents were “more plausible than others,” such as the imaginary meeting in London between Marx and the Russian anarchist Mikhail Bakunin in November 1849. In reality Bakunin was languishing in prison at the time, having been arrested in the spring for his role in the Dresden uprising: “this is not to say that the two men would not have met had Bakunin managed to escape to London,” Barker suggests; “they almost certainly would have done.”

Barker’s novel is an alternative history interspersed with genuine correspondence, notably Jenny’s lengthy, heart-rending letter to Joseph Weydemeyer of 1850, along with a handful of Marx’s missives to Engels. This is a playful approach with highly amusing results, especially in the case of Jenny, who bears absolutely no relation to the devoted wife and political supporter she is typically portrayed as.

In Marx Returns home life is a revolutionary community of women ruled over with an iron fist by Helene, and which the man of the house has little control over and scant understanding of (the tomboyish Marx daughters Jennychen and Laura also constantly do their best to sabotage his writing with their disruptive “class war games”). In an early scene Marx convalesces in bed while Jenny reads out passages from his and Engels’s Communist Manifesto in between bouts of hysterical laughter: “Where on earth did you get such a warped imagination?” his wife asks. Why expect any “understanding” from a woman whose husband is thrusting himself upon the family housekeeper? If only the Victorians had had Twitter then Marx might have ended up in the dustbin of history.

Jenny’s sexual liberation, which she pursues with gay and disinterested abandon, is matched by Engels, whose confession of love for Irish factory worker Mary Burns is a further source of alienation that does nothing for Marx’s peace of mind. The central yet invisible protagonist (and occasionally the novel’s Dickensian commentator) is Das Kapital, the sublime work of art stuck inside a lump of marble that refuses to come out. Marx digs up its passages at random. Famous lines are written in the most unlikely of circumstances, such as when he and his son Edgar cross the “slime pools of Piccadilly” on their way to the “bourgeois retail park” of Regent’s Street, where Marx embarks on the first of his phantasmagorical train rides. Finding himself trapped inside the carriage and careering towards disaster, he reaches for what he believes to be the emergency brake, only to discover a label informing him: “There is no emergency brake on the revolutionary train”.

What is missing in Barker’s novel is a fully-fledged encounter with the proletariat, the Real of capitalism. Occasional mention of “creatures” and their “containers of darkness” is as far as the author is prepared to go in revealing the conditions of the English working class; which, after all, is Marx’s ultimate “object”. On the other hand, and as Alain Badiou has noted in his recent brief introduction to Marxism, despite the fact that three volumes of Das Kapital were eventually published, “the concepts of class, class struggle and proletariat were not decisively dealt with” in any of them.

Marx Returns works on two narrative levels: the romantic and the philosophical. Apart from the romantic level (I shall avoid spoilers), Barker throws the philosophical cat among the pigeons by introducing material from Marx’s Mathematical Manuscripts  into a narrative which begins in 1849, in the aftermath of the failed revolutions of 1848 (in reality Marx’s manuscripts date from 1881, two years before his death). Published posthumously, the Manuscripts are not widely known, and their strictly mathematical importance is debatable, despite Engels’s claim at his friend’s funeral of Marx’s “independent discoveries” in this field.

Happily for this maths dunce Barker’s treatment of the mathematics is minimal. Marx’s concern with the infinitesimals is more or less a reprise of Bishop Berkeley who, in The Analyst, published in 1734, expressed his bafflement and consternation at the idea of vanishing quantities, or “ghosts of departed quantities”. Should we admit the existence, as Newton and Leibniz did, of quantities smaller than any we can define, but which nonetheless still do not equal zero? Unsurprisingly Marx seized on the contradiction himself, even if his exploration of the question was, by his own admission, that of an armchair enthusiast (he was sixty-three years old at the time).

Barker turns the historical tables completely, making Marx’s quest to reach zero a fanatical obsession that dramatically eclipses his struggle to complete Das Kapital. In this sense Marx Returns is a “what if?” story about a man whose reality was perched precariously, so to speak, at the edge of the void. Might history have turned out differently had Marx solved the riddle of vanishing quantities in time?

The question may be hypothetical, but the problem of zero still looms large in today’s critiques of political economy. I am thinking of the social and economic theorist Jeremy Rifkin and his zero marginal cost theory, and the British journalist Paul Mason, who supports Rifkin’s analysis. “An economy based on information,” declares Mason in Postcapitalism: A Guide to Our Future “with its tendency to zero-cost products and weak property rights, cannot be a capitalist economy.”

No doubt Marx will be turning in his grave at the news. The problem with such utopian statements can be summed up in one word: tendency. Historically, capitalism has been rather efficient at driving down manufacturing costs; it goes hand in hand with driving workers into poverty and unemployment. How low do prices have to go before Mason’s postcapitalist dream comes to fruition? One might as well ask how long’s a piece of string? What Mason fails to acknowledge is that capitalism is a non-zero-sum game whose rules capitalists are endlessly “creative” at revising.

In the year of the Marx bicentennial anniversary Barker’s novel is an experimental and thought-provoking work, the type of counterfactual history that makes us question precisely why and how “Marx was right”.

Chris Rumble is a doctoral candidate in the Department of Political Science and International Relations at Seoul National University, Republic of Korea. He writes on music and popular culture for Original Sonic Truth. 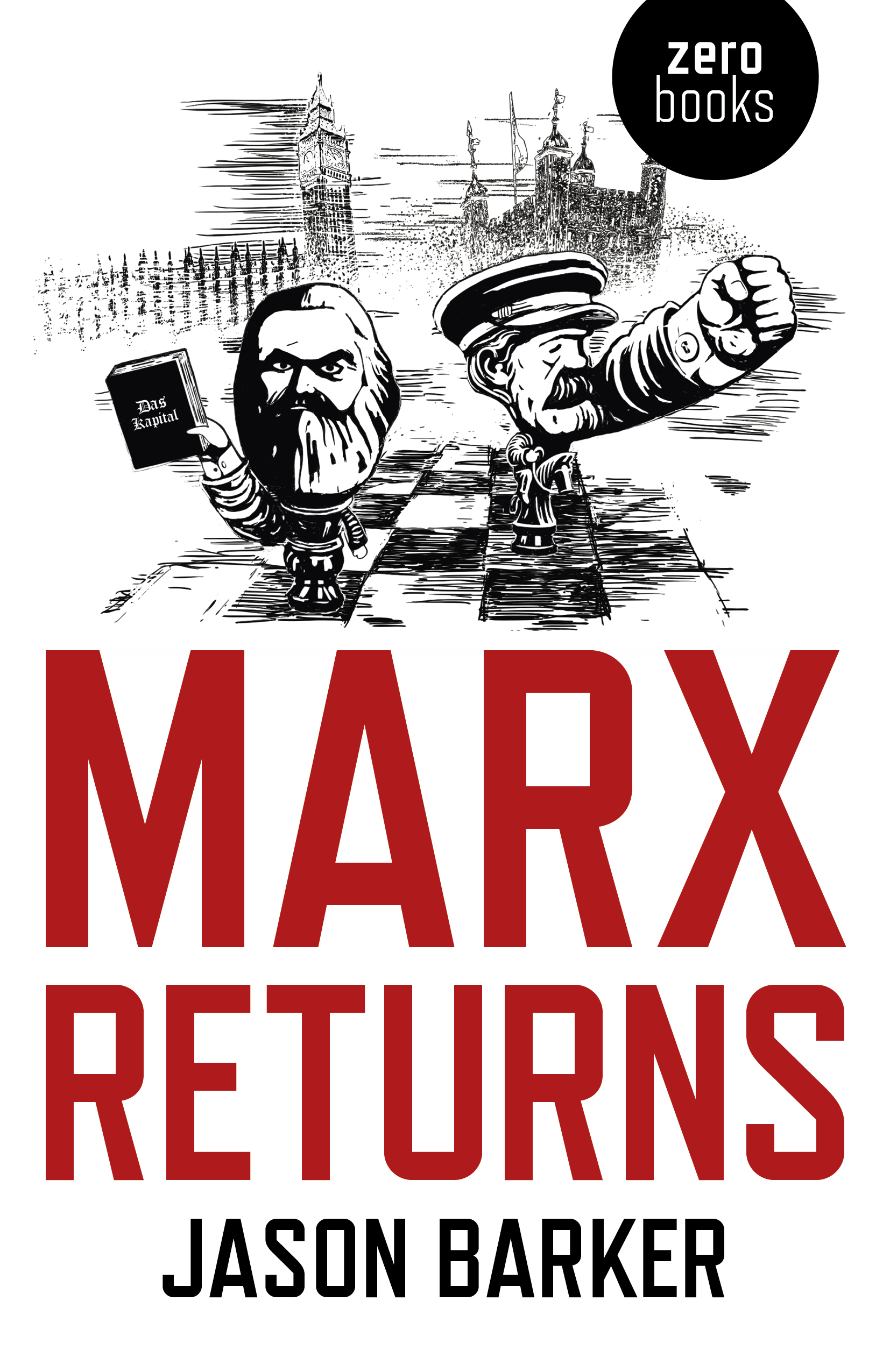