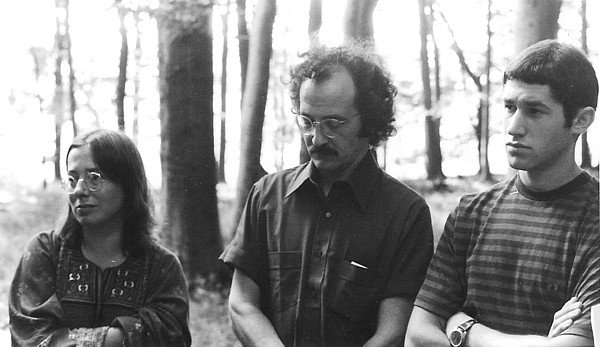 Moishe Postone (1942-2018) died in Chicago, Monday, March 19, 2018, after a battle with cancer.  A member of the Historical Materialism Advisory Board, he delivered one of the plenary talks at the Historical Materialism conference in London last November (2017).  He became seriously ill some weeks after returning to Vienna.  He was working there this academic year at the Institut für die Wissenschaften vom Menschen (Institute for Human Sciences).

This year, 2018, marks the twenty-fifth anniversary of the publication of Postone’s most influential work, Time, Labor, and Social Domination: A Reinterpretation of Marx’s Critical Theory (Cambridge: Cambridge University Press, 1993).  It was the subject of a symposium in Historical Materialism and has been translated into many languages.  It was preceded by a widely discussed essay “Anti-Semitism and National Socialism,” which appeared in Germans and Jews Since the Holocaust, Anson Rabinbach and Jack Zipes (eds.), New York: Holmes and Meier, 1986.  Moishe collaborated with Craig Calhoun and Edward LiPuma in co-editing Bourdieu: Critical Perspectives, Chicago and Cambridge: University of Chicago Press and Polity Press, 1993).

Moishe Postone introduced himself in the lobby of the philosophy building, Dantestrasse 4-6, next to the Institut für Sozialforschung, in Frankfurt in the fall of 1975.  He spotted me carrying an issue of Telos and came over.  That chance meeting changed my life.  It began an enduring and special friendship, as decades of conversations—some beginning after midnight in the Anatevka, an afterhours Frankfurt bar—followed about Marx, critical theory, and the world formed by capital and resistance to it.

Moishe was a deliberate but not scholastic reader of texts; he thought conceptually and historically in equal measure.  He took the time he needed: his dissertation was ten years in the making, followed by another decade of work before Time, Labor, and Social Domination appeared in 1993.  It was my privilege to be involved in those processes.  Moishe’s intellect was piercing, his mind large.  The horrors of twentieth-century history, colonization and anti-colonial struggles, world wars, hyperinflation and depression, and the genocidal devastation of the Holocaust were never out of mind, but he sought to understand this history’s movements and discover what grounds for hope could be found in them.  Thinking, for Moishe, was taking responsibility for the world.

Moishe was a thinker of the New Left.  He felt anguish over what Herbert Marcuse called “surplus repression.”  We sense it in Moishe’s most recent essay: “this gap between what is and what could be, allows for a future possibility that, increasingly, has become real historically.  It is this gap that constitutes the basis for a historical critique of what is.”[1]  Moishe was a graduate student at the University of Chicago during the height of the student and anti-war movements.  In the summer of 1969, SDS, the foremost New Left group in the US, splintered at its convention in Chicago.  By the time that Moishe left Chicago in the early 1970s to teach briefly at Ramapo College in New Jersey before moving to Frankfurt, the New Left was dissolving, with some factions turning toward extralegal actions, others toward Maoism or Old Left communism, and others fading away.  At the same time, feminism was resurgent and other social movements were rising.  Several journals, including Telos and New German Critique, offered a space for New Left thinkers to develop and to engage currents of critical theory imported largely from Europe.  Reading the Grundrisse when it came out in a full English translation in 1973 was, I believe, a defining moment for Moishe.  The idea that capital is its own barrier stuck with him.  Moishe’s 1974-5 essay in Telos with Helmut Reinicke, “On Nicolaus,” gave a first look into his reading of the Grundrisse.[2]

As the birthplace of Frankfurt School critical theory, Frankfurt was a home to the New Left.  Exiled from France after May 68, Daniel Cohn-Bendit set up the Karl Marx Bookstore on the edge of Goethe Universität in Frankfurt.  From Frankfurt, it was easier to recognize the New Left as an international phenomenon—always an important point for Moishe.  The Frankfurt SDS had been led by the brilliant activist and thinker Hans Jürgen Krahl, one of several students of Theodor Adorno who were developing “die neue Marx Lektüre.”  On this new reading, Marx was a critic of political economy, not a critical political economist.  Marx’s theory of value was not a radicalized version of the classical, Ricardian one; it was a theory of the social form of labor in capitalism.  Marx’s revolutionary aim was not to redistribute value but to overthrow value as the measure of wealth and surplus-value as the aim of production.

For Moishe, the important question of the distribution of wealth in capitalism was preceded by the question of the social form and purpose constitutive of wealth and labor in capitalism.  He criticized traditional Marxism for its transhistorical (Ricardian) conception of value as embodied “labor.”  No.  Value is a socially specific form of wealth that gives capitalism its double character and “heteronomous” historical dynamic.  The centerpiece of Moishe’s reinterpretation of Marx lies in what he calls the value treadmill.  Because abstract labor forms the substance of value whereas productive power is a concrete feature of labor, increases in the productive power of labor yield more use-values (useful things) per hour but not more value.  In the short run, increasing the productive power of one’s workers gives one a competitive advantage that results in extra surplus value but only until one’s competitors adopt the more productive methods.  If the productive power of labor keeps increasing, value (whose magnitude is labor time) as the measure of wealth becomes increasingly anachronistic and what Moishe called shearing pressures mount.  In “The Current Crisis and the Anachronism of Value: A Marxian Reading” (2017), Moishe focuses on climate change and the “crisis of work” as two manifestations of the shearing pressures created as value (not the theory of value) becomes anachronistic, while the value forms constituting capitalist production keep being reproduced.

Moishe took in earnest Marx’s statement in the Grundrisse that “the exact development of the concept of capital [is] necessary, since it [is] the fundamental concept of modern economics, just as capital itself … [is] the foundation of bourgeois society”.[3]  In thinking about class in capitalist society, Moishe was guided by Marx’s observation that “classes are an empty word if I do not know the elements on which they are based.  For example, wage-labor, capital etc.”[4]  That led him to identify “the ‘essential relations’ of capitalism” as “the forms of social mediation expressed by the categories such as commodity, value, capital, and surplus value.”[5]  Classes in capitalism exist and are to be understood in that context.

Moishe was wary of forms of anti-capitalism that did not first come to grips with capital.  That gave urgency to his own efforts to plumb capital’s depths.  Political efforts to overthrow capitalism rooted in traditional Marxist or Ricardian socialist ideas could not bring about the revolutionary transformation away from capital’s domination aimed at by Marx’s critical theory.  Moishe’s essay “Anti-Semitism and National Socialism,” from 1986, revealed how destructive a perverse strain of anti-capitalism could be.

For Moishe, capital gave history a direction that it does not have on its own: capital was the truth of what Hegel called spirit, Geist, in his Phenomenology of Spirit.  Moishe saw idealism as the “rational core” of Hegel’s dialectic in its gesturing to capitalism’s “domination by abstractions.”  History may not be on our side, but, because of its dynamic, contradictory double character, constantly constraining the new by the increasingly anachronistic social forms of value and surplus-value, capital generates precarious possibilities for an end to exploitation and domination.

Though I took Time, Labor, and Social Domination, with its forceful criticisms of Friedrich Pollock, Max Horkheimer, and Jürgen Habermas, to be offering a reinterpretation of Marx’s critical theory as an alternative to the Frankfurt School, recent scholarship suggests that a reading of Marx as a critic of political economy such as Moishe’s counts as a branch of Frankfurt School critical theory with roots in Adorno, and more particularly, Adorno’s students Alfred Schmidt, Hans-Georg Backhaus, Helmut Reichelt, Hans Jürgen Krahl, Helmut Reinicke, and more.[6]

Moishe lived and thought with style, grace, and large purpose.  A visit with Moishe, whether over the phone or in person, was always a special occasion.  It is hard to think now of never picking up the phone to say, “Hello, Moishe, it’s Patrick.”

[1] “The Current Crisis and the Anachronism of Value: A Marxian Reading.” Continental Thought & Theory, Volume 1, Issue 4: 150 years of Capital, 53.

[4] Introduction to the Grundrisse, in Texts on Method, edited by Terrell Carver, 72.