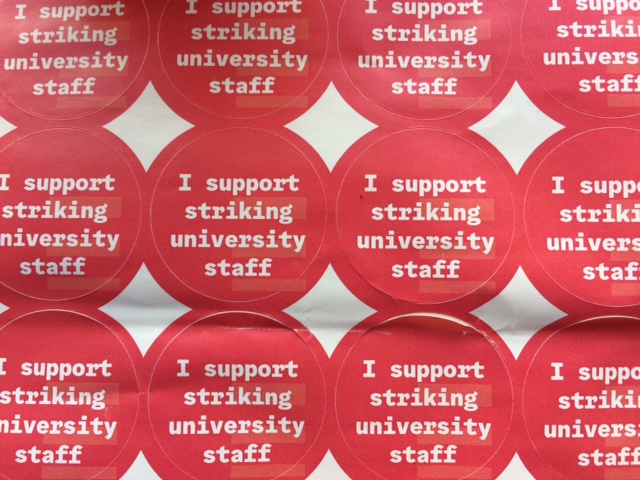 HM editorial board members are currently on strike in their pre-1992 UK universities over the private financialisation of pensions.

Editor Jamie Woodcock is an academic worker with a few institutions at present, some of which will be on strike starting the 22nd February 2018. He is a member of two trade unions: UCU and the IWGB. The following six points are intended as a brief reflection before the strike [this post was originally published by Notes From Below on 21 February 2018]:

1. The strike is about pensions!

The UCU is planning 14 days of strike action to oppose changes to the USS (Universities Superannuation Scheme) pension. For many workers, pensions are now limited to the legal requirement from employers. Others are denied pensions by using bogus self-employment status. At present, academic workers have a relatively good pension scheme.

There are two points worth noting about this pension scheme. First, while employers pay into the scheme, so do we. Second, the pension scheme has already partly been sold out. This means that early career academic workers already get a worse deal in USS. Instead of their pension being based on their final salary at retirement (which would mean more) it is now based on their career average (which would be less). Furthermore, academic workers in post-92 institutions are on a different pension scheme.

The changes are being forced through by Universities UK and supported by the Chair of the USS Board. They claim that the pension scheme is running at a deficit. Their valuation has been challenged and is based on a worst case scenario of all universities going bust at the same time. Their proposal is to move away from a “defined benefit” scheme, in which you can predict what your pension will be worth at retirement. Instead it will become a “defined contribution” scheme. Rather than a guaranteed amount, it means contributions are placed into an individual portfolio of stocks and shares, exposing them to risk. This means the benefit could reduce as the investment is gambled.

So, why should other people care about this? Public sector pensions not some sort of “privilege”, they are deferred earnings. Attacking these pensions has the potential to undermine private sector pensions too. While we are defending our pensions, they are something that all workers should receive. Within universities, reducing the cost of pensions opens up the possibility of further privatisation. Lower costs make universities a more attractive opportunity for private ownership.

2. The strike is not about pensions!

Universities have changed. When I finished my PhD, a professor of employment relations asked me where I would be taking up my lectureship. At the time I was working at three different universities in London, stringing together short term, hourly paid contracts. I had to explain – to a professor of employment relations – that work had changed for many in the university.

Over 50% of academic workers are now employed on precarious contracts. For example, many contracts are for only one year (sometimes excluding the summer). These can be extended, but not beyond three years. This is because the offer of a fourth year provides some scant employment protection.

Conditions are getting worse. There has not been an above inflation pay rise in universities since 2009. (As a side note, this was during my undergraduate degree. This means that during my entire time in Higher Education, the pay of academics has declined). Estimates put this loss in pay at 14.5% in real terms.

As we have written about elsewhere in Notes from Below, workers’ inquiry can be used to investigate and organise in the university. There is a long list of other issues including: precarity, pay (and the gender pay gap), institutional sexism and racism, workload modelling that bears little if any relationship to reality, stress and bullying, the pointlessness of REF (a way of comparing research outputs) and TEF (the teaching version), the attempt to make academics act like border officials, racist policies like Prevent, and so on.

Legally, this strike is about pensions, but it is also clearly about so much more. It is about all the other issues we know are happening at universities, but have not fought over. This is because we were told the big fight over pensions was coming.

For many, the strikes are about so much more than pensions. This is despite the fact that UCU is not officially contesting anything else.

The UCU balloted members in 61 Universities and laid out a plan of strike action starting on the 22nd of February. The schedule is as follows:

The strike, withdrawing our labour, remains a key way we can fight our employers. This is also being accompanied by something called action short of a strike (ASOS). This involves working to contract, refusing to take on voluntary duties, etc. At some universities, there is now a threat that failure to do all of this additional work (outside of the contract) will result in full deduction of pay. This reveals how much unpaid work academic workers are expected to do.

At universities across the country, branches are planning to do more than withdraw their labour for the day. For example, planning teach outs and a demonstration in London on the 28th of February.

Between branches, activists are organising to coordinate action. You can join the Facebook group here.

4. We need to do more than the UCU strike!

In my last job, I would usually only come onto campus to teach. When I was not teaching, my only interaction with the university management was by email. This was regardless of whether I was physically “there” or not. While away from campus I spend my time on research. This makes striking in universities feel different to many workplaces. It is therefore worth briefly considering the academic labour process and how it can be effectively disrupted.

If we isolate out the activities of the university to just academics (which while useful for now, is also a terrible idea – and I’ll return to this in the next paragraph), what is the aim of the work? The aim is twofold. First, to sort potential workers for the job market. This involves teaching, marking, and awarding of degrees. Second, doing “research.” This is something that most of the time does not matter to the university until the REF. This is an expensive and subjective attempt to “measure” the quality of work approximately every five years. In addition to this, academic workers have to do increasingly larger amounts of administrative work.

So what does this mean for effective strike action in the university today? During a previous dispute, my local branch asked the national UCU if we could organise an email boycott as part of the strike. They replied by email (without any irony) that this would not be possible as it would be “too effective.” As many precarious academic workers have no permanent offices, this means it is often management’s only way to communicate.

The university is much more than just the academics. My last department employed more support staff than academics. This includes technical staff, cleaners, groundskeepers, catering, and so on. It would take many days (and perhaps even weeks) for my employer to notice I had withdrawn my labour. But when cleaners strike the effects are felt the next day. While academics have seen their conditions eroded over the last ten years, the cleaners in central London have been a beacon of precarious workers struggle.

Many of the plans for the strike at different universities sound exciting, but imagine a strike in which all the workers of the university walk out. For many academics, this would mean getting to know the other workers upon which the university relies. It means seeing that while we have relatively good conditions, we also have the freedom to organise not found in many workplaces.

The UCU is a large union with an established structure and resources. It is involved in national pay bargaining - the setting of rates of pay across every university in the country. This means collectively negotiating between the union and the all of the employers. While it has not used this capacity in a long time, this means the UCU can organise national strike action with all universities at once.

UCU is the largest trade union for academic workers. In many university departments the majority of academic workers are members. This means branches can act as a focus for workplace concerns and organising in universities.

Many branches across the country spend huge amounts of time and resources on case work. This involves supporting vulnerable workers against management. The expertise within the union has been developed over many years, with some successes on a local level and a layer of militant activists.

This strike is a test of the UCU. Previous struggles – particularly around precarious contracts – have been deliberately held back to wait for the fight over pensions. The result of this strike will be decisive.

There is much we can learn from the alternative unions in London. IWGB and UVW provide powerful examples of successful organising in universities. This is why I organise in my workplace and am a member of both UCU and IWGB. At Senate House (part of the University of London), IWGB members will be walking out on the first day of the UCU strike. This is the kind of action we need to win the dispute.

Rather than starting with the union - in this case UCU - we need to begin instead with the workplace. By understanding how we work, we can best plan to disrupt the workplace - particularly by organising with other workers in the university. It is this kind of organising that can challenge our employers and build power.

Although their work was very different to contemporary academic workers, the Clyde Workers’ Committee laid out an important principle for the relationship between workers and the union:

We will support the officials just as long as they rightly represent the workers, but we will act independently immediately they misrepresent them. Being composed of Delegates from every shop and untrammelled by obsolete rule or law, we claim to represent the true feeling of the workers. We can act immediately according to the merits of the case and the desire of the rank and file.

As the strike begins, this is an important principle to keep in mind. We have voted for strike action to defeat the pensions changes, anything less is a failure.

On the eve of the UCU strikes we should all be ready to fight as hard as possible for victory – but soon after we need to have a discussion about what happens next.

At Notes from Below, we will be on picket lines handing out “the University Workers” bulletin, which can be found online here. If you want to join a picket line, there is information about Senate House here.

Jamie Woodcock is a researcher at the Oxford Internet Institute, author of Working the Phones, and a member of the Class Inquiry Group. Twitter: @jamie_woodcock.